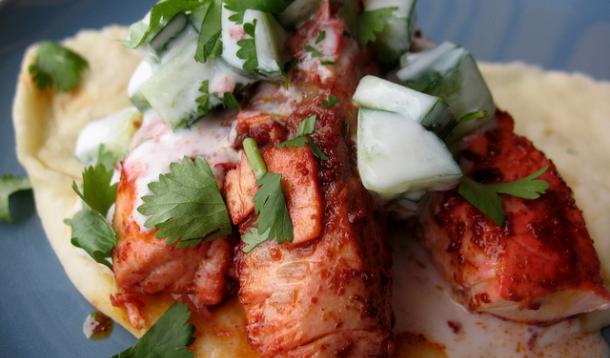 Usually I would never even think of putting salmon and tandoori seasoning together, but this recipe works. Actually it more than works, it's one of my family's very favorite Jamie Oliver recipes.  The salmon holds up well to the curry flavors, and the cucumber salad adds a slight cooling effect.  You can use store bought naan breads, but I like to use my own No-Fail Flatbread recipe.  Don't make the cucumber salad ahead of time, as the liquid from the cucumbers waters down the yogurt and makes it runny.

Roughly chop the cucumber and place in a sieve over a bowl to drain while you assemble the rest of the ingredients.

Set your salmon on a plate and dry it off with some paper towel. Spoon some tandoori paste into a small container and then spoon and smear it all over the salmon (never let the spoon that touched the salmon go back into the main jar).  Get a pan good and hot over medium heat, add a bit of olive oil, and then add the salmon to the pan, skin side down.  It will crackle and pop somewhat, but don’t worry.  Cook on each side about a minute and a half, until cooked through.  As each piece is cooked, remove from the pan and set aside on a clean plate.

In a small bowl stir together the yogurt, chile and cucumber, sprinkling in salt and pepper to taste.

Serve the salmon on the flatbread, with a dollop of the cucumber salad. Sprinkle with fresh cilantro.  Squeeze a little lemon juice over top to finish.