A Super Easy, But Fancy Dessert 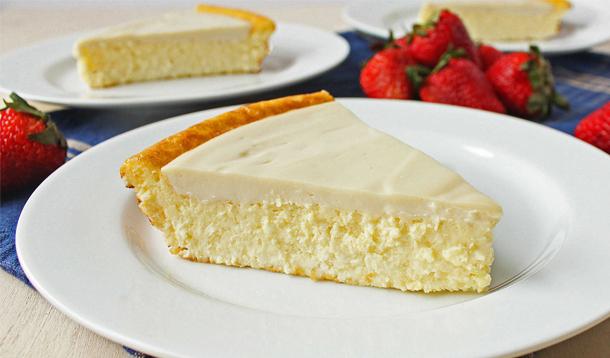 Everyone needs a really good plain cheesecake recipe in their repertoire. Top slices with fruit, chocolate sauce and chopped candy cane, lemon curd, or whatever else strikes your fancy for a decadent dessert! It also freezes well so you can double wrap this up, freeze it, and bring it out for New Years or later on. I love the sour cream topping, which adds a really nice dimension to this cheesecake and is really easy to do.

Stir the crumb crust ingredients together in a bowl and then pat into a greased 10 inch springform pan (don't go up the sides). Bake for 10 minutes and then let cool.

Begin making the filling. With an electric mixer, beat the cream cheese until fluffy. Add eggs one at a time, beating well with each addition. Beat in vanilla, then sugar. Pour over baked graham crust. Bang the pan on the counter a few times to release bubbles in the batter. Bake 45-50 minutes. The cake may be fairly moist in the middle, which is fine.

Make the topping: In a bowl stir together the sour cream, sugar, and vanilla. Spread over the cheesecake as soon as it comes out of the oven, and then return to the oven and bake for 10 more minutes.

Allow the cheesecake to cool at room temperature, and then put it in the fridge and let it chill for several hours or overnight.