The Easiest Gift You'll Ever Make 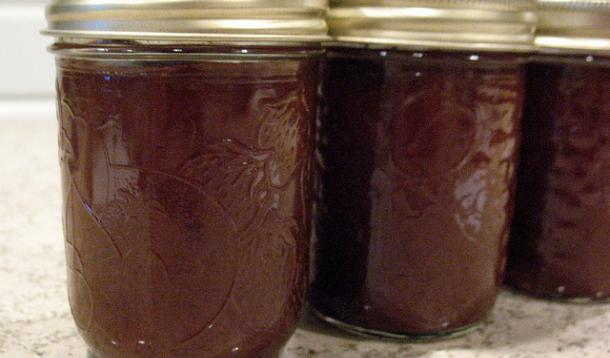 A few Christmases ago, one of my husband’s co-workers gifted us a jar of apple butter.  Spiced and thick, it went beautifully on toast and scones.  With apples at a good price in the stores right now, you can pick up a large bag, dig out your slow cooker, and effortlessly make apple butter as Christmas gifts for your friends, family, or kids’ teachers. Don’t let the canning part scare you—if you don’t want to can, the butter keeps well in your fridge so you can make it, pack into mason jars, put on a lid, and just give it away soon after. Top the jar with a cute piece of fabric trimmed with pinking shears and a ribbon, or get the kids to design cute labels to make it festive. You can even get the kids involved with chopping up the apples, if you wish!

Toss the apple chunks into one really huge pot, or two large ones. Divide the apple cider between them. Turn the heat to medium to get it boiling, then reduce the heat to low and cover.

Cook the apples for about 30 minutes, until they are soft and you can break them apart when you stir. Use an immersion blender, food processor, or blender to puree them all up and pour into a crock pot.  Be careful when you blend them, don’t fill the blender or food processor too full.  Hot apple sauce spatter is painful!

Stir the sugars, cinnamon, ginger, and nutmeg into the applesauce and let it bubble away in the crockpot for eight hours. Mine was still pretty watery, which is what you don’t want, so I then turned my slow cooker to high, raised the lid, and continued to let it bubble away for another hour or two until there was less liquid and the butter was much thicker. What you want in the end is something that will be thick enough to mound on a chilled plate when you are done.

To can the butter:

Bring a boiling water canner to a boil.  Sterilize 7 or 8 half pint jars, and have snap lids in boiling hot water for about 10 minutes so that the glue will soften.

Ladle the hot apple butter into the jars, leaving about ¼ inch head space. Wipe the rims clean.  Top with a snap lid and screw on the band until just tight.

Lower each jar into the boiling water canner, cover, and bring the pot back to a boil. Each jar should be covered with water. Let boil for 20 minutes before gently removing to a tea towel lined counter.  You’ll know that the jars have sealed when you hear a ping from them, and the lids have depressed. If they haven’t sealed, store them in the fridge and use within a few weeks. Otherwise, allow the jars to cool (don’t tighten the bands!) label, and store for up to six months.

Makes about 6-7 half pint jars