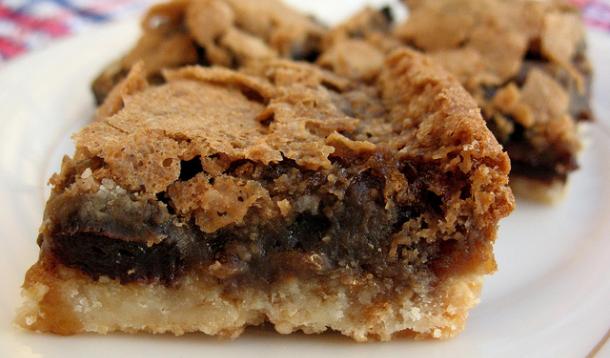 Butter tarts are one of those desserts that say Thanksgiving and Christmas to my family because I really only make them during those holidays. Maybe it’s because the idea of making tarts seems like a bit of work and I usually end up buying pre-made pastry so that I don’t have to do all that rolling. Fortunately, I found this recipe for butter tart bars that is entirely from scratch. They are less messy to make, easier to store, and don’t include corn syrup. What are you waiting for?

Pre-heat your oven to 350 F and line a 9x9 inch square pan with parchment paper.  Set aside.

In a medium sized bowl, stir the flour and sugar together. Using either two knives or a pastry blender, cut in the butter until the mixture resembles fine crumbs. Press evenly into the prepared pan and bake for 15 minutes.

While the crust is baking, stir together the butter, eggs, vanilla, and brown sugar in a bowl until well mixed. Add the flour, salt, and baking powder and stir until combined. Fold in the nuts and raisins before scraping the whole works over the warm crust after you remove it from the oven. Put the bars back into the oven and bake another 20-25 minutes longer.

Cool the bars completely on a wire rack before slicing. They can be kept in an airtight container in the fridge for about four days, or you can freeze them in a single layer, wrapped up really well in foil, for about 2 weeks.