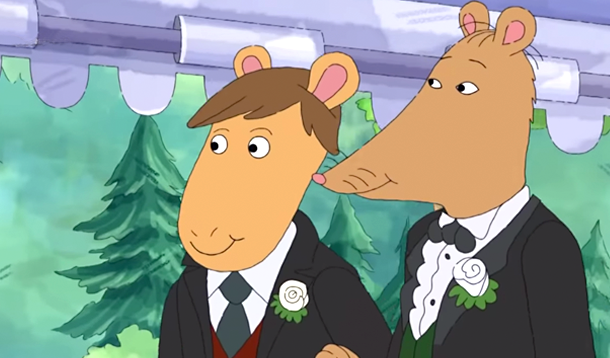 Season twenty-two of popular, long-running kids’ cartoon Arthur opened with a wedding. Teacher Mr. Ratburn has a new husband, and we have even more respect and admiration for Arthur creator Marc Brown and the show’s team.

Historically, most kids shows have shied away from showing any type of family other than married, same-race, heterosexual couples. Whether due to the show creators’ personal beliefs, or more likely fear of backlash, most shows portrayed this type of family as the “ideal,” with anything straying from this designated norm seen as promoting deviancy. And the backlash is real. Looking at some of the reactions to this Arthur episode has me wondering if we really are in 2019.

But people are beginning to wake the hell up. We are recognizing how damaging this tunnel-visioned image is for children, and we are demanding better representation. Showrunners are listening.

It started with multi-racial, adoptive, and single-parent families. Super Why and Daniel Tiger’s Neighborhood are two examples of interracial families and biracial characters. Llama Llama features a single-mother-lead family as its main focus, not simply included as supporting characters. With the wedding of Arthur’s teacher, we are embracing what we have known for years – children can not only handle LGBTQ+ characters, but they benefit from seeing them.

But did you know Arthur was not the first kids’ show to welcome LGBTQ+ characters? It may have grabbed headlines because it is such a familiar show – and a character many of us grew up with – but there are several other kids’ cartoons who did it first. They didn’t make the news, because the characters simply existed organically within the show as any other character would, and as all characters should.

As in real life, these LGBTQ+ characters are whole people with regular lives and identities that exist beyond their sexual orientation and gender expression.

If you are thrilled to see Arthur embracing diverse representation, as you should be, here are some other shows to check out with your children:

Steven lives with a group of female warrior aliens, most of whom are queer. Like Arthur, Steven Universe included a wedding between two queer characters. The show’s creator, Rebecca Sugar, told Entertainment Weekly, “By including LGBTQIA content and characters in G-rated entertainment for kids, you tell kids when they’re young that they belong in this world. You can’t not tell them that. There can’t be only a certain group of kids who are told someone will love you by all the entertainment that they see. It’s just so unfair.”

As in real life (are you seeing a theme?), there is more than one representation from the LGBTQ+ community in The Loud House. The main character’s best friend has two fathers (and is also adopted and part of a multi-racial family, yay representation!) One of his ten sisters also explores her sexuality after finding a love note from a girl. Showrunner Michael Rubiner says he doesn’t have an end game for the character’s story arc, but that “with ten girls in the family” it only made sense “to explore one of them being LGBTQ.”

Showrunner Alex Hirsch not only fought hard for LGBTQ+ representation on his show, he did the work to make sure he did the community justice and showed the relationship between Deputy and Sherriff in a way that was sensitive to the LGBTQ+ community. He did what all creators who are representing a group they aren’t a member of should do – he asked for feedback from the community he was representing.

Star Vs The Forces of Evil

Refreshingly, this show completely normalizes all sexual orientations and gender expressions. It simply exists in this cartoon world, and is shown as naturally and organically as cis-het identities are. Girls kiss girls, same-sex crushes occur as no big deal, and characters bend gender norms – nobody bats an eye. Sending the message of normalcy is the most beneficial approach for children. Gender and sexual-orientation diversity is normal, not exceptional.

She-Ra and the Princess of Power

While we are celebrating shows that have LGBTQ+ representation in their characters, it’s important to support shows made by LGBTQ+ people. The She-Ra reboot has both. Showrunner Noelle Stevenson is queer and does an amazing job of representing the spectrum of sexuality and gender expression in the show. Some characters are openly gay, some are openly bi-sexual, some are still exploring. Gender stereotypes are challenged, characters are multi-faceted, and as is so important, it is all presented with normalcy and subtlety. (Also, it’s just a great show.)

In amazing news, there are too many kids’ shows that feature fantastic LGBTQ+ representation for me to list here. Some others include Danger & Eggs which was co-created by a trans woman, has LGBTQ+ representation in the show, and is voiced by many trans and queer actors. Adventure Time and Clarence both feature same-sex couples. Like Arthur, Hey Arnold! features a gay teacher and his partner. There are so many more out there, if you look for them.

For those worried that showing representations of the LGBTQ+ community is “not letting kids be kids” or confuses them, rest assured that seeing these characters presented without fanfare is less confusing to them, not more.

The inclusion of these characters makes children’s cartoon worlds look more like the real world they live in. They see absolutely nothing wrong with different expressions of gender or sexual orientation unless someone teaches them that hate by falsely telling them it is wrong. Telling them that something they accept naturally – that love is love – is negative, that is what confuses and harms children. Challenge your prejudices, put in the work to learn about the LGBTQ+ community, and strive to make a more tolerant and loving world than the one in which you were raised.

Congratulations on your wedding, Mr. Ratburn. I hope your marriage brings you as much joy as witnessing it has brought countless children.