Grab a Paddle, and Set Course for Schitt's Creek for Some Great TV

even without a paddle, you'll love it! 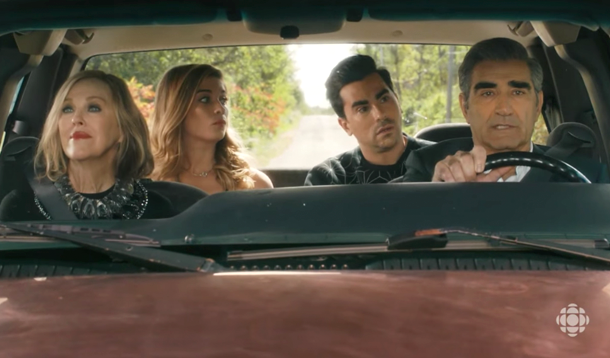 Grab your paddle, it’s time to set course for Schitt’s Creek. If you aren’t watching this fabulous Canadian comedy, get thee to CBC and watch it.

The premise is simple: A wealthy family (the Roses) lose their fortune due to some shady business dealings and have nowhere to live. Schitt’s Creek to the rescue. Years before, the patriarch of the family, Johnny (played by Eugene Levy) bought a small town named Schitt’s Creek as a gag gift for their son David (played by Dan Levy). Johnny and his wife Moira (Catherine O’Hara) and their children, David and Alexis (Annie Murphy) move to a motel in Schitt’s Creek with the intentions of staying temporarily until they get back on their feet. Five seasons later, they are still there, and the hilarity continues to ensue.

It’s a perfect TV show. It stars Canadian icons and SCTV alumni Catherine O’Hara and Eugene Levy, who are brilliant in their roles - but it also puts the spotlight on the whole damn Levy family. Eugene’s daughter Sarah plays a small part as diner waitress Twyla, and Eugene’s son, Dan steals the entire show. All of it. Dan picks up the entire program, folds it up, puts it into his pocket, and runs away with it - he is that consistently good. Fictitious sister, Annie Murphy, completes the whole priceless TV family.

Here’s the other thing with Schitt’s Creek  – it isn’t just funny. It’s a show about family values, sticking together, picking yourself up by the bootstraps, all of that positive stuff without being gag-worthy. It’s also a representation of a bisexual character, something that is severely lacking on current TV.

Do you love it yet? Yes? Then why has it gone virtually unnoticed until now? It’s been on for five seasons, but only recently has it become mega popular. I will admit even I just discovered it a few months ago. The most likely theory is that is has just taken off in the US.

*Sigh*. What is it about Canadians that we don’t consider something to be truly successful until we get American approval? Canadians are funny. We are. Have you seen Corner Gas? National treasure, that is. Half the comedians in the US are Canadian. Why are they in the US now? Because we didn’t give them the opportunities and the respect (and money!) they deserved here. Dan Levy should have his face on Canadian money, he is that good – so why did no one recognize this until Americans said, “Hey, this is pretty good”?

It isn’t just comedy that seeks American approval. Remember the Barenaked Ladies? Remember how all Canadians knew who they were and loved them in 1991, and some of us even earlier? Remember when they crossed into the US market with “One Week” in the late 90s and were called “new band, Barenaked Ladies?” What the actual fuck was that about? How did they become a new band a decade after being famous in Canada? Why was their success measured by when they became known to Americans? If we had really given them the proper recognition in Canada, maybe they could have bought that Dijon ketchup a lot sooner.

Okay, I will get off my Canadian-made soapbox now. But I will implore you, as Canadians, you need to check out our Canadian content before it becomes big in the US. Just because they don’t know about it down there yet doesn’t mean the quality isn’t great.

In the meantime, Schitt’s Creek gives me hope that both the world, and Canadians, will realize that Canada puts out awesome stuff. And Dan Levy made my little heart sing when he accidentally forgot to remind Americans on Twitter that the show aired in the US on that specific day (different than in Canada.) He clearly still thinks of the show as Canadian. I hope he and the rest of his talented family and colleagues encourage more Canadian productions as priceless as Schitt’s Creek.