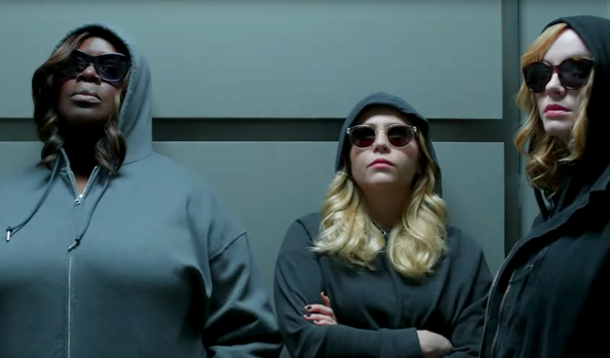 I have a confession to make: I’m prone to scrolling through Netflix for half an hour and settling on old Friends reruns. There’s something about committing to a new television show that just doesn’t jive with me - I already feel committed enough to my husband and our three kids.

Recently though, a friend of mine suggested that I watch a new show on Netflix called Good Girls. I told her that I was looking for something light and fun, because I can’t handle intense dramas after a long day of mommying. She assured me that it would be the perfect escape, and I decided to take her suggestion and watch an episode. The first episode quickly turned into three, and by the end of the night I’d binged half the season and was up way past my bedtime.

If you haven’t watched Good Girls yet, I’m here to introduce you to your new favourite binge-worthy TV show, and don’t worry, I won’t give anything away that you won’t discover in the first fifteen minutes of the first episode.

Good Girls is a crime comedy-drama that centres around three mothers and friends, Beth Boland (Christina Hendricks), a stay-at-home mother of four who is married to her slimey car salesman husband; Ruby Hill (Retta), Beth’s best friend, a happily married wife and mother to two kids, one of whom is ill and requires expensive medical care; and Annie Marks (Mae Whitman), Beth’s younger sister and a single mother, who is currently battling her ex for custody of their daughter.

At first glance, Good Girls appears to be a light and funny show about the relatable moments of motherhood, like the movie Bad Moms for TV. Hendricks, Retta, and Whitman are all TV veterans, already winning our hearts in their popular roles from past TV shows; bringing these three strong women together makes for a winning trio. But Good Girls takes a different turn, when each woman requires cash, and fast. What results is a hilarious grocery store heist that left me chewing my nails and laughing hysterically.

The grocery store heist is just the beginning of what turns into a whole lot of genre-bending fun for Good Girls. One minute, you’re watching a hilarious comedy about three relatable mothers, the next minute you’re crying because it’s just so dang real, and then you’re frozen in terror through nerve-racking suspense.

Good Girls was the perfect watch for me, because it hooked me in right away, and made me want more. It was easy to commit to this show, because I love each character, and feel like I can relate to them. As a mom, it is wonderful to see these women and all of their badassery, take on the patriarchy, even if it is by robbing a grocery store.

This is a show that requires that you suspend your disbelief, because some stuff is just not logical. I don’t think entertainment needs to make perfect sense; just go with it. Some critics say that Good Girls doesn’t know what it wants to be, is it a comedy, or a drama, or a criminal suspense? I say, let it be all of those things.

As women, we often wear many different capes; one minute we’re making a joke to diffuse a situation with our kids, and then we’re sharing a meaningful moment with a friend, and soon after settling a work crisis over email. Sometimes we are doing all of this at one time, our lives are constantly teetering between comedy-drama-suspense.

Watching Good Girls and all its ambitious genre-bending fun just reminded me of my own life, and provided me the perfect escape from it too.