I listened to the reasoning, re-watched some of the episodes, and I have to say now I am a believer. 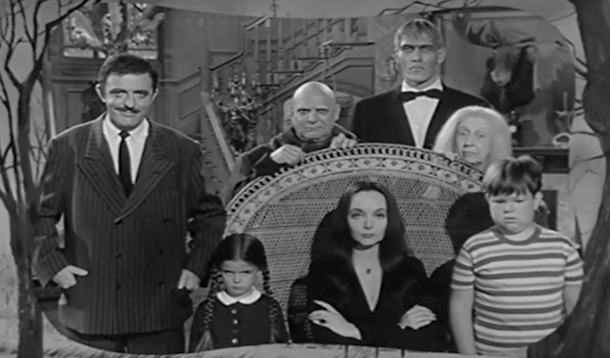 When you think about the perfect family, who comes to mind? The Cleavers from Leave it to Beaver? The Brady Bunch? Growing Pains’ the Seavers?

If you are like me, The Addams Family is not who immediately springs to mind, but that is the answer one member of a comments section posited. How can they be the perfect family? They give their children TNT as play toys!  But then I listened to the reasoning behind it, re-watched some of the episodes, and I have to say now I am a believer.

Despite their doom and gloom persona, they have a remarkably positive attitude towards life. Sure, they are admiring a thunder storm, but they are appreciating it the way we would a stunning sunrise, and discussing what a lovely mood it puts them in. They frequently see the beauty in the world, even if their definition of it differs from ours. How many of us can say we actively seek out and appreciate the marvels life has to offer?

They are demonstrably affectionate with each other. Whether it is Gomez remarking about how lovely his wife looks today, or Morticia telling Gomez to “hurry back” with an eyebrow raised, The Addams parents are still very much hot and heavy for each other after all these years. But beyond the sexual tension, there is a quiet connection rarely seen in sitcom families. If you watch closely, one of them often has a hand rested gently somewhere on the other. Whether in an act of support while they tackle a problem together, or simply a small gesture of affection, they frequently touch, letting the other know they are loved and supported.

On the subject of sexuality, they respect each other’s space. Gomez may be kissing his way up Morticia’s arm, but if Morticia has had a long day and says she isn’t in the mood, Gomez says he understands and backs off immediately. And frequently, it is Morticia herself initiating sexual advances. She is a woman both comfortable with and in control of her own sexuality. This can be hard to find on modern TV shows; to normalize it in a black and white sitcom from 1964 is very impressive.

Morticia and Gomez have disagreements, but rarely fight. Most sitcom families during their time had the wife voicing her opinion but deferring to the patriarch of the family to make the final decision, often with a stern lecture from Dad to Mom. Modern sitcom parents are fueled by petty arguments, often with the pendulum swung too far the other way, having Mom belittle Dad, the buffoon.

Morticia and Gomez are a partnership. When a conflict arises, they discuss it with calm heads, they brainstorm solutions, and they make a plan. And both of them hold equal weight. Their goal is to solve the problem, not to win the argument, and that is something all couples should aspire to.

And they don’t just excel as a couple; they shine as parents too. Their children are well-mannered -which they learned from the fantastic example set by their parents – curious, bright, and considerate of others. Morticia and Gomez practice what we now call “Gentle Parenting.”

They listen to their kids and try to understand them. They do not jump immediately to punishment, they delve into the reasons behind their children’s undesirable actions. When Pugsley joins the Boy Scouts, a move that for the rest of us would parallel “falling into the wrong crowd” they don’t simply force him to give up his new friends and hobbies, they talk to him about this new behaviour. They seek help from a professional. They support each other through this parenting crisis. Eventually, Pugsley gets over his phase and returns to his “normal” self, never having felt shunned or judged by his worried parents.

But make no mistake, when it comes to their children, Morticia and Gomez will advocate and protect as fiercely as any mama and papa bears. When his little girl comes home in tears, Gomez scoops up and cuddles his child, listening to her lament about the killing of a dragon in a book read to her at school. The Addams will not stand for such cruelty being taught their children, and they approach the school board for change. In true Addams fashion, they are firm in their conviction, but gentle in their demeanor, and they enact change without threat or intimidation.

While we may not share their enthusiasm for exploding trains or carnivorous plants, and we certainly don’t encourage our children to play with hatchets, we could all learn a thing or two from The Addams Family about marriage, family, and general life outlook.

Keep the Beaver. So long Seavers. I want to be an Addams.

RELATED: The 10 Habits that Make a Healthy Family