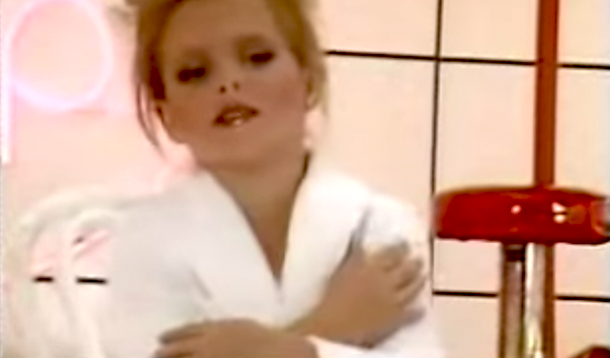 “Come on everybody, now don’t be confused. We’re just little boys and girls.” I never paid much attention to the first line of the Minipops theme song when I was a kid. I mean, they’re called the Minipops, they’re kids, what’s to be confused about? Then I re-watched an old video of them as an adult, and immediately realized why they needed that disclaimer. These kids didn’t just look like adults, these kids looked like runway models – at best.

I see how creepy they are now, but as I kid, I adored them. In fact, I sent a letter to them asking to become a Minipop (an anecdote that earned me the nickname “Minipop” in university). I must have been aware of the sexualization to some extent, even as a child, because I included in the letter than I knew I wasn’t attractive enough to be in the videos, but perhaps I could sing on the albums.

I liked the music, but the videos were my real obsession. I took out one of their VHS videos from the local video store so many times, I’m surprised they didn’t just sell it to my mother outright. I stood in front of my crappy 80s spare room TV, and did all the motions along with the kids on the screen. Thirty years later, I still remember all the routines.

It wasn’t until decades later when nostalgia took over and I found those old videos on YouTube that I realized how problematic they were. All of the girls were in full make-up. The boys were often shirtless, in just open vests. I think experimenting with make-up or wearing it for a recital is fine - I’m no prude when it comes to this sort of thing - but on these kids, it seemed to be done to make them seem not just more grown-up, but – sexy. It was incredibly creepy to view as an adult.

The Minipops are back and as popular as ever, branded now as The Mini Pop Kids, but this time they look like children. They wear age-appropriate clothing and age-appropriate make-up, and the lyrics are changed to be more kid-friendly (no one is making love.) They are absolutely more palatable than the Minipops of the past, but are they a great example for kids yet?

As I said in my letter to the OG Minipops, I knew I was not attractive enough to be one of them. The new Mini Pops are still attractive. Sure, not in a lure creepy old men way, but compared to the average population of children they are above-average looking. From the commercials at least, which is where they reach children after all, there doesn’t appear to be a lot of diversity in body types, nor do they appear to be very disability inclusive.

While they may be less creepy than before, they are still setting an unrealistic standard for kids as role models. If I were to write that letter today, I would still have considered myself too unattractive to meet their requirements.

I’ve learned from the Minipops (old and new) that children adore pretending to be performers they see on TV. Being age-appropriate is a good start, but we need to start seeing more average-looking kids, with a variety of body-types, and a representation of disabilities, if want to do right by our children. We need to realize that our kids don’t just enjoy watching these kids, they want to be them, and with that comes a great responsibility on our part.

As for me, I no longer dream of being a Minipop. I have no desire to dress-up and prance around lip-synching on camera. But if they offered me a chance to join the Mini Pop Kids as one of the people who change the inappropriate lyrics into kid-friendly ones, well, I’d take that gig – provided I could leave the red lipstick at home.