Why You Should Take Your Tweens to "Love, Simon"

Take your tweens and teens to see this movie, and then have a chat with them. 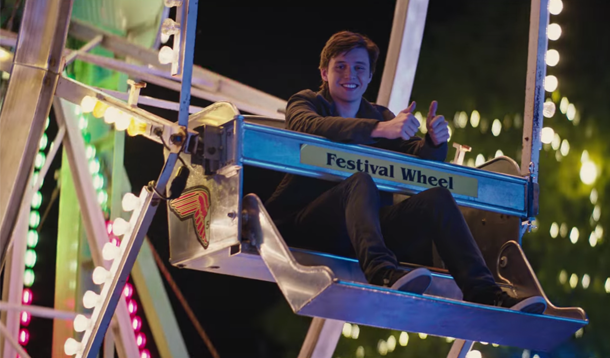 I debated whether or not I should take him. It was PG-13, he’s 10. I checked the parental guidance suggestions. I wasn’t concerned about swearing (he’s heard worse from me,) or the mild sexual talk (pretty sure he knows teens have sex.) There’s a homophobic slur, which gave me pause, but we could talk about it. Black Panther was PG-13, and violent as hell, and we took him to that without hesitation.

Celebrities were buying out theatres for people to see this monumental movie. Everything I read said how important the message was. I took my chances and brought him to see Love, Simon.

He was the only kid in the theatre. In fairness, it started at 7 pm on a school night, and my kid is a night-owl like his mother. But no one seemed to pay him any mind, and he didn’t notice the discrepancy of his youth.

Within the first three minutes, one of the teenagers said, “I’m figuratively starving.” As far as I was concerned, we had gotten our money’s worth with this lesson – but the movie pressed on.

Though largely a “talking movie” my son sat attentively through the nearly two hours. It’s hard to commit it to a genre. I would have called it a coming of age movie, or a rom com that blurred into a drama. My son decided it was a mystery. He was unconcerned with emotions and turmoil, he wanted to know who Simon was in love with, and he spent the entire movie searching for clues. That Simon was gay hadn’t really blipped on his radar.

Ultimately, this is good. It’s good that he sees nothing out of the ordinary in a love story about two teenage boys. But that doesn’t mean that the issues in the movie don’t exist, or that his friends, or even he, won’t struggle the way Simon did as they get older. It was important to me that we discussed what we had seen.

After watching every last credit, as is his way, we came home and immediately curled up on my bed to unpack the movie. We discussed why coming out can be very difficult, and reinforced that the only person who gets to tell people someone is gay is the person themselves. I assured him that whether he is gay or not, he will never need to come out to my husband and I, because we have never assumed he was straight. He lamented how unfair it is that gay people have to come out when straight people don’t.

I asked him if kids at school ever said, “That’s so gay” and told me they did, rolling his eyes is disdain. We discussed some ways for him to handle it when he heard people say it, and why equating “gay” with “bad” was so hurtful.

I asked him what he would do if a friend confided in him that they were gay. He still seemed confused why any of this was a big deal, but he was starting to see why it was important for those of us who don’t see it as a big deal to be vocal against those who do.

I’m sure some people may feel I burst his bubble but introducing him to the concept of homophobia when he had been living blissfully unaware; but it will come one day soon without or without my help, and I wanted to give him the tools to handle it when it did. I wanted my voice in his head, saying, “This is wrong” when that hate crept into his world.

We expressed our relief for Simon when he no longer had to carry around this secret. “You can exhale now, Simon,” said Simon’s mother. We agreed that secrets were hard to carry, whether they had to do with sexuality or not.

He surprised me by noticing something else in the film, before I even had a chance to bring it up. He disliked how one male character had approached Simon to “Get a girl to go out with him.” He was disgusted that they could think anyone but the girl herself had any say in her romantic life.

Like me, he also disliked that this character had pushed this girl to do something (non-sexual) when she had clearly said no. Even though she eventually relented and was glad she did, my 10-year-old son decided for himself this character was out of line and should have respected her no.

The movie itself was fantastic and moving, but it was most valuable to my son as a starting point for a great conversation about topics that are hard to bring up in a vacuum. I’ve never felt the need to have a specific discussion about how some people are gay, that’s just been a fact of life for him as much as the knowledge that some people are straight. The subject of straight-privilege, and what it means to come out, came less organically, but was no less important.

And something magical happened in that theatre that wouldn’t have happened with the discussion alone. When homophobia was met with swift repercussions in the film, a group in the audience burst into applause. My son began to clap too. When Simon finally gets his kiss (no spoilers,) the same group whooped and cheered. My son followed their lead.

Though unintentionally, this group reinforced what was good and right for my son. They represented the public, and they were his first experience with strangers demonstrably reacting to homosexuality and homophobia. He will hear many deplorable reactions in the future from crowds of strangers, but his first exposure was positive, and that will imprint on him.

Forget the swearing. Forget the mild mentions of sex. Forget the PG-13. Take your tweens and teens to see this movie, and then have a chat with them. It may be exactly what they have been needing to hear from you. Tell them they can exhale.

RELATED: Wonder Woman is the Badass Our Daughters Have Been Waiting For