Sony Pictures was forced to apologize over "Peter Rabbit" film, and sorry, I'm not sorry they got their hand slapped. 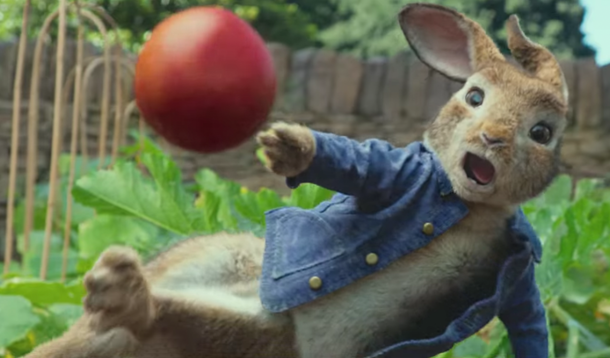 I haven't bothered to try to empathize with what it might be like to live in my son's shoes as a person with food allergies. Believe me, living in my own shoes as the parent of a child with food allergies is terrifying enough. It's heartbreaking to watch a child grow up burdened with the knowledge that he may die because of something he puts in his mouth.

Do you know the phrase "I'm putting my life in your hands" that sometimes people say like a joke? That's what my son does every day, and for him it's no joke at all.

Every day, my son trusts me with his life. A mistake on my part while making dinner could kill him.

Imagine being in my shoes. How much does that humble one, knowing you have been given that trust? You should see how much fun it is to decide whether it's safe to take a dinner invitation.

Too often, I read sad stories about kids with allergies dying by accident. They gave that trust to someone, and it was misplaced. It hurts me, deep inside, to read these stories about a death that didn't have to happen. Food allergies are serious business, and to hesitate to treat accidental consumption as a dire emergency can be fatal.

So imagine how it feels when it is no accident.

Peter Rabbit, which released this past weekend, had a scene in it which is right out of my son's - and many other children's - nightmares: a man with an allergy to blackberries is deliberately pelted with blackberries. One even gets in his mouth, which triggers a reaction. But, you know, it's okay! He had his Epi-pen.

This is absolutely, 100%, not okay. Not at all. And I say this as a parent who has ALREADY had a terrified child ask what to do if this happens to him who hasn't seen this movie.

What happened in Peter Rabbit would be called food allergy bullying in real life. It would be called assault by the police whom I most certainly would get involved if that was my child. And it is not okay just because there's an Epi-pen around. An Epi-pen MIGHT save someone's life if they're having a reaction. If the reaction isn't too severe. If there's enough of it. If it's administered fast enough.

As you can see, it's not a guaranteed thing.

To treat something so life-threatening so casually in a film is frustrating to people like me, who have had to spend our children's entire lives educating the ignorant about food allergies. Films take hundreds of people to make. Not one person before wide release stopped and said, hey this is bad.

This is the sort of stuff people like me are always up against, when the people with the power to broadcast the truth end up trivializing or giving misinformation instead. Sony deserved every bit of the righteous indignation they got for this scene. Sorry, I'm not sorry that they've got a PR nightmare on their hands. They made a big mistake, and they were right to apologize for it. And hopefully, now that so many people are paying attention to the furor, this time they get the message about how serious this is right.

RELATED: Despite Having Food Allergies, This Restaurant Made Us More Than Welcome