We Can Choose Kind

We not only have the power, but the responsibility to offer protection and compassion to those who need it. 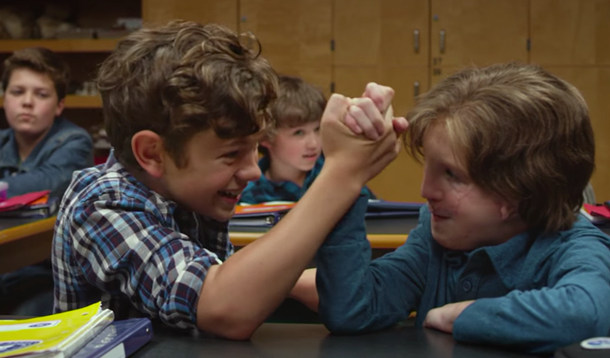 Recently, I came across the diary I kept briefly in grade five, and it broke my heart. One entry detailed with great shock and joy that not one, but two kids had wanted to sit with me on the bus that day. It was a significant enough event that I chronicled it, writing it down to keep for posterity.

It was important to document, because in the 10 years I had been on earth, it had never happened before, and I wasn’t sure it ever would again. I was chubby, I was pathologically shy, and I did not consider myself a member of the general community, but rather someone on the outskirts, existing in parallel.

When my nine-year-old son and I began turning the pages of R.J. Palacio’s Wonder, I was surprised to see so many of my own childhood insecurities reflected in Auggie, the ten-year-old protagonist with malformed facial features due to Treacher Collins Syndrome who was headed into the cut-throat world of mainstream schooling after being homeschooled until grade five.

Grade five. The year I entered the gifted program, started a new school in which I knew no one, and everything changed. Like Auggie, I was terrified I would continue to be a spectacle. But I wasn’t. It was the first year I made real friendships - friendships that have continued for nearly 30 years since. It was the first time I was ever seen for who I really was, not what I looked like.

Though Auggie faced far more difficult challenges than I did, watching him go through his social metamorphosis brought to the surface a lot of emotions I have carried with me all these years. Only this time, I was seeing them through the eyes of my son, hanging on to Auggie’s every word, coming out of my mouth.

In stark contrast to me, my son is popular and outgoing. He has been spared the torment of being the outcast. Somehow, this made Wonder an even more important read for him, because it highlighted his responsibilities toward those who are. Each time I read aloud an injustice committed towards Auggie, I watched my son for his reaction. He felt pain for Auggie. He felt anger, and he felt confusion for how someone could treat a person so poorly simply because their face looked different than most.

We talked about bullying, and about acceptance. We shared despair in the knowledge that people can be so cruel. We discussed ways to put more kindness into the world. This book that my son had begrudgingly agreed under protest to read with me became an embodiment of the philosophy by which he is choosing to live his life.

As we got ready for to see the movie we have been counting down to since we shut the back cover of the book, my son hopped down the stairs proudly donning a pink shirt. It took me a moment, but it hit me looking at him across the breakfast table that it was his anti-bullying shirt. I asked if it was intentional; he said it was. Months after reading the book, he had held onto the core values within it.

I sobbed through the movie. I sobbed because I was once a kid who nobody wanted around. I sobbed because I am a fiercely protective mother who feels her child’s pain as her own. I sobbed because I know the overwhelming elation at watching your child overcome a personal obstacle, and the effort it takes to hang onto your chill when it happens. I even cried because Auggie’s sister found redemption and community in theatre, just as I had as a child. And all of it was amplified by experiencing it alongside my own child, who thought I didn’t notice the times he tried to casually wipe away his own tears.

As we left the room, moved, a little shaken, hearts full, a little boy stood at the door, holding it open for each person as the standing room only theatre shuffled out. A kind gesture from a quiet little soul, perhaps inspired by the motto of the movie. I thanked the little man, and his mouth curled up at the corners.

It’s a harsh world, and people can be cruel. That’s a lesson we learn in childhood, no matter how hard our parents and teachers try to shield us from the reality of it. But what Wonder teaches us, and what I am trying to instill in and model for my children, is that we each have to power to reject the cruelty from our own hearts. The world can be cruel, but we don’t have to be.

We not only have the power, but the responsibility to offer protection and compassion to those who need it. We can choose what we put out into the universe. We can choose kind.

RELATED:Teaching Our Children About Truth, Kindness, and the Reality of Being Nice