Long Time Running: A Tragically Hip Documentary for Everyone

This movie is the lasting piece we will all get to revisit when we’re missing them or wishing we could see one more show. 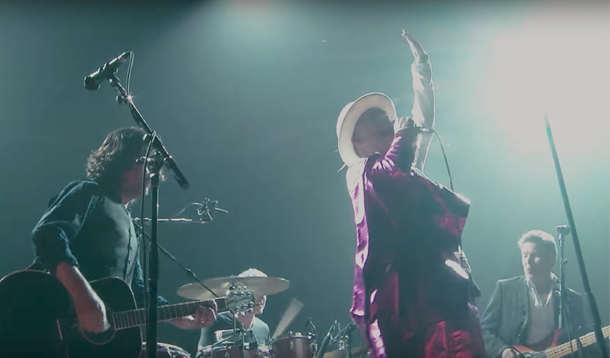 I had the privilege of being in the audience for the world premiere of Long Time Running – a documentary of the time leading up to and during The Tragically Hip’s Man, Machine, Poem Tour. I walked away from that movie experience much like how I walked away from the last Hip live show I saw: feeling everything.

From May to August, 2016, The Tragically Hip fans were taken on an emotional ride from first suddenly being told about lead singer Gord Downie’s incurable brain cancer to being told we had an opportunity to see the band one last time that summer. I remember friends becoming frantic first when they heard the news of Gord’s diagnosis and again when hundreds of thousands of people tried to get tickets to the tour shows.

Fans of The Tragically Hip are some of the most loyal I’ve seen. They do the usual things you’d see with a big-name band. They’ll camp out overnight to get tickets to a concert, buy band merchandise, and know every word to every song. But there’s something more about these fans that makes this fan-band phenomenon unique.

From being in and around Hip shows for about twenty-five years, I’ve tried to get to know fans better. In the last tour, I stood in line for the merchandise booth for an hour, asking about people’s relationship with the band. The types of comments I heard were: “Their music was played at my wedding,” and, “I played their tapes to keep me company on long drives,” to, “I’ve had a Hip song on in the background for all my major life events of the last two decades.”

You can’t listen to a Gord Downie lyric without wondering what is going on in that beautiful, complex brain of his. You can’t hear the first chord or two of a song and not know immediately that Gord Sinclair (bass), Paul Langlois, (guitar) or Rob Baker (guitar) are playing those chords. Gord Downie has mentioned that it is Johnny Fay (drums) who is the glue of this group and that Johnny is the one he relies on to pull him through a song. His drumming is the right balance between providing the musical heartbeat we need with well-timed extras to make us jump. When you listen to this band, you can feel that they have been together for thirty years, conflicts and all, and have made a commitment to stay together.

Not everyone is a huge fan of The Tragically Hip, and after having watched Long Time Running, I think that those who aren’t into their style of music and question those of us who are, will watch this movie and say: “I get it.”

The filmmaking partnership of Jennifer Baichwal and Nicholas de Pencier (Watermark, Act of God) combined with the editing genius of Roland Schlimme provides an incredible movie experience for everyone, fan or not. The movie itself is a great piece of art.

I came armed to the premier with a box of tissue, knowing how I was at the Man, Machine, Poem tour and while watching the CBC broadcast of the Kingston show on August 20. Surprisingly, I didn’t need much of that tissue. The movie was certainly an emotional one, but not just grief. Fear and much laughter and joy happened, too.

I felt the fear while listening to the band members, Gord’s doctors, and the security team talk about what to do if something goes very wrong for Gord during one of the shows. The looks on their faces were so real. Gord talked about how it was for him to go on stage and how his shiny suits made him feel. It exposed us to how afraid he was. The tone of his voice made those words circle around the theatre and go right into my bones.

I loved how Baichwal, de Pencier, and Schlimme artfully crafted an emotional experience that we could get through okay. There were moments of breath-holding sadness but those were positioned between meaningful pauses and many funny comments from all five members of the band. The movie’s artistic team gave us time to catch our breath, observe the beauty of the cinematography, hear meaningful stories, and prepare ourselves for the end.

However, this was an end that felt less like a “good-bye” and more like a “see you later.” It’s a bit like the final scene of Oceans Eleven where after their disaster-stricken experience worked out okay, all of them stood relaxed by the fountain together, then turned to walk away when they were ready – on their terms. I imagine each of these five men will turn to new important projects in their lives, whether those are artistic in nature or important family-focused ones.

This movie helps fans of all degrees feel more connected with The Tragically Hip band. It gives us an experience that leaves an impression, which I imagine will be felt and thought about for quite some time afterward. This movie is the lasting piece we will all get to revisit when we’re missing them or wishing we could see one more show. The movie’s creative team really helps us feel like we are at the next best thing to a live performance.

Long Time Running will likely be available in the future for our small screens but I highly recommend seeing this movie on the big screen. There is camaraderie with Hip fans in the large theatre when everyone is wiping tears and laughing together.

RELATED: What Gord Downie Just Taught Us About Dying - and Living