Is My Kid Ready for Star Wars?

Things may be complicated by his nickname. 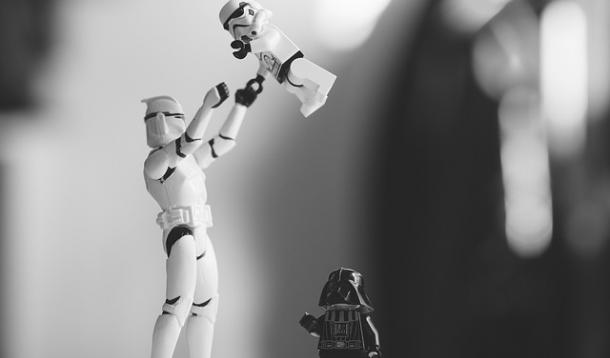 I don’t use my son’s picture or name on the internet (for a whole bunch of reasons) but I do like to talk about him a lot. I had to come up with a nickname. After some deliberation, we came up with Vader.

For those familiar with the Star Wars franchise, Darth Vader is the fun-loving, occasionally murderous second-in-command of the Empire, a political group bent on domination. While Darth Vader SOMETIMES tortures people and destroys planets, he is - at heart - a good person. As such, there seemed to be no character more appropriate to borrow for my son’s secret online identity. The problem is that my son doesn’t really know who Darth Vader is. And I’m not sure when to tell him.

Trying to figure out when my son is ready for different movies and TV shows has been a real challenge for us. My Vader is someone who basically takes whatever he sees on the TV and beats it to death. We once watched The Lion King 14 times in a two-week period, and by the end of it all he wanted to do was sing “Can You Feel the Love Tonight.”

I suppose there are worse things. The problem with us is violence on TV.

Vader is one of the kindest, most loving people I’ve ever met. He’s sensitive and sweet, he shares well, and he tells his mom that she gives the best kisses in the world and tells me that I give the best hugs in the world. And then he watches Kung Fu Panda and tried to kung fu the bejeesus out of everyone he sees. So lately I’ve been trying to figure out when he’s ready to watch Star Wars.

I’ve talked to a few friends and they’ve said things like, “I saw Star Wars when I was like… 3.” Yeah, okay, but if all your friends jumped off a bridge, would you? I saw The Terminator when I was 8. I saw Child’s Play and Nightmare on Elm Street when I was 10 or 11. Just because we did things a certain way when we were kids (I literally hate getting old and talking about things this way) doesn’t mean it was the right way to do things.

I don’t know if Vader is ready to meet his namesake. Here are some of the key points of the first Star Wars movie:

Also, I don’t know how Vader (my son) will react when he finds out that Vader (Darth) is the ABSOLUTELY TERRIFYING VILLAIN of the first two Star Wars movies. I don’t know if he’ll figure out WHY his nickname is Vader. I don’t know if I want to find out.

Tomorrow I must watch Lego Batman to figure out if it’s suitable for Vader who has been obsessing over The Lego Movie for the past few weeks. What I’ve learned is that learning whether a TV show or movie is appropriate on the fly is NOT really your best bet (thanks, Secret Life of Pets… a clearly adult film).

So, here’s my question for you… when do YOU think a kid should watch Star Wars?

RELATED: The 18 Greatest Star Wars Gifts in the Galaxy