What Does it Really Take to Be a "Bad Mom?" Probably Less Than You Think

According to history, it's not that hard to achieve 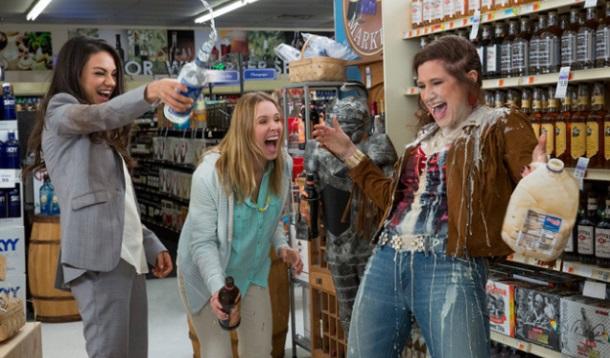 Everyone loves watching movies, and in 2014, a good three-fourths of consumers saw at least one movie in theaters. For moms, the movies they watch are usually animated, cheesy, and full of bright, garish colors perfect for a toddler.

But now, there's a new movie that's not only bringing to light the everyday and often hilarious moments a mother experiences, but sparking a debate over the idea of motherhood as a whole. Okay, so “Bad Moms” came out last month, but if you’re like me, you’re lucky if you find time to see a movie in theaters at all.

"Bad Moms" is a Hollywood Blockbuster looking to push the limits. Enter Mila Kunis, playing newly single mother Amy who thrives on bringing store-bought doughnut holes to a class bake sale. Co-conspirator mom Kiki, played by Kristen Bell, teams up with frazzled Carla, played by Kathryn Hahn, to save their stressed out friend from the PTA bullies looking for their next victim.

Not only is 'Bad Moms' hilarious, it's finesse in taking the shame out of motherhood is top notch. For those glue gun-wielding-Pinterest-crafting-gluten-free-baking-crunchy-moms, this flick isn't for you. Rather, it's for the moms who go days without washing their hair, take a bottle of wine to drink in quiet in the bathroom, and who come to the conclusion that it is okay for your child to wear their pajamas to school because you are just not up to argue.

These imperfect moms are exactly what an exhausted mom needs, as they'll make you feel like every single thing you are doing is okay. Motherhood isn't easy, motherhood isn't clean, and to these moms, that's all alright.

Plus, they'll make you want to become best friends with Mila Kunis, which can't be a bad thing.

Not only is "Bad Moms" causing a scene on the big screen, it's making people wonder what it means to really be a Bad Mom. In a world where societal pressures on mothers are constantly on the rise, this question can make some wonder, "what's so bad about Bad Moms?"

According to Sigmund Freud, a lot. Bad mothers were a dangerous threat to their children, their family units, their communities, and posed a risk to national security.

Yes, unfit mothers were placed in the same category as WMDs. If only our toddlers knew.

Freud's theories came to light in early 20th century America. This was a time where American women were protesting for the right to vote, and therefore taking a more visible role in public life. They were challenging their Victorian-era gender norms, and many men felt threatened.

Generations after Freud published his theories, propaganda was littered nationwide, showing a "Bad Mom" leaving her crying child with a seemingly clueless husband as she went out to demand equal rights. The ad campaign caught the attention of U.S. President Theodore Roosevelt, who accused women of smothering their boys too much and turning them into dependent wimps. He even came out with a song, "I Didn't Raise My Boy To Be A Soldier."

Come World War Two, a 1942 study in Time explored the fate of "sissies" and "tyrant" children who were victims of their mother's kindness.

It was a common fear in the 1950s that men who grew up being too close with their mothers would end up gay. Add that to the nation's Communism scare, and mothers every day were told that there was absolutely nothing that could harm the county more than a gay, Communist son.

The world's criticism of mothers doesn't even attempt to touch the the financial hardship that comes with raising a child, a detail most mothers are blamed for. Besides caring for our children, our families, and ourselves, it's hard to stay afloat of the debt that's oh-so easy to rack up.

As of 2016, the average Canadian household holds more debt than in any other of the G7 countries, which is an embarrassing number considering the average U.S. household has an average of $129,579 in debt at any given time.

Much too often, having a child brings thousands of unexpected dollars in debt as the parents try to climb out of the hole of medical bills, wages lost during maternity leave, and piling debt from the necessary items for the new child.

Food for picky children, new wardrobes for growing sprouts, and private lessons are not cheap. They add up, and result in crippling credit card debt. In fact, the average Canadian home debt relative to annual income is a whopping 166.1%.

So, when making "Bad Moms," filmmakers Jon Lucas and Scott Moore -- known for the wildly successful "Hangover" series -- looked to their wives for inspiration.

Lucas and Moore, both fathers, saw that their wives were questioning the traditional gender roles placed upon them the second they became mothers. They decided to attempt to change that, and told the Los Angeles Times, “So often [in movies and TV shows] the moms are just rolling their eyes at the dads. The moms we know are way more rock and roll than that.”

The best thing about "Bad Moms?" It does not have a happy ending in that the moms change who they are to fit into the molds to match those PTA bullies. The moms do a great job highlighting the importance of how it's unrealistic to have an all around perfect mom while wearing spaghetti-stained shirts, taking shots.

P.S., I'll take one of those doughnut holes if you're offering. Store bought is my favorite.

You can check out the trailer to "Bad Moms" here.