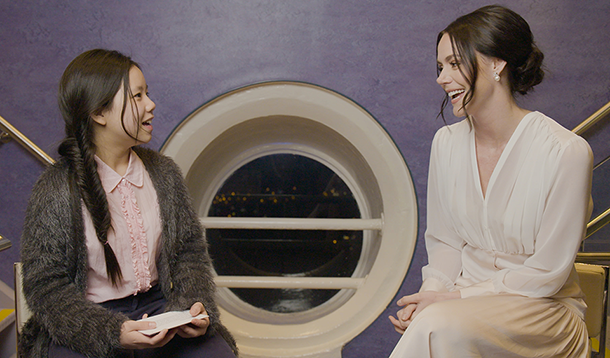 I had a feeling that words cannot express. I attended Barbie’s 60th anniversary celebration at the CN Tower in Toronto. It was a party to celebrate Barbie’s milestone anniversary, filled with nearly 300 people! There were media, influencers and so many other amazing women and girls who each had unique stories to tell. The party included musical performances, a cupcake decorating station, an Ardene braid bar (thanks for the awesome fishtail braid!), a photo booth that looked like a life-size Barbie box, and an activity station hosted by Let’s Talk Science (to name a few things). The food tasted like heaven (with no exaggeration – there was even a beautiful custom Barbie cake from Nadège Patisserie), and the entire party arrangement was planned out without a single flaw. It was such a pleasure to meet people who left a long-lasting and lovely spark in my heart. On that amazing night, one specific person made it even more memorable for me.  This inspiring woman is Tessa Virtue.

Tessa Virtue is a Canadian Ice Dancer and half of the Olympic skating duo with her partner, Scott Moir. She is a three-time Olympic gold medalist, a three-time world champion and, along with her partner, one of the most decorated figure skaters in Olympic history. Tessa is a role model for many girls, and it is not only for her passion and for her success in ice dancing, but also for her kind and caring personality. She carries this feeling of warmth that will stay with you forever. If you ever see her in real life, I promise the very first thing that will happen will be that your jaw drops so widely that an entire horse can fit through. Tessa Virtue is one of the most beautiful and elegant women I have ever seen in my whole life. I saw so many videos of Tessa and her ice dancing partner, Scott Moir, but she looks even prettier up close. It is a brilliantly fantastic dream meeting her in real life. The emotion you get from watching people online and interviewing in real life has an enormous difference, believe me. I learned many interesting facts about Tessa that you would never know from reading articles on the internet, for example, both of us are lovers of quotes and like to collect them all the time. I found out that night what she had to suffer as a child who wanted to be at the summit of the mountain.

Tessa experienced two painful surgeries on her legs. I can barely even imagine the sorrow and pain she had to undergo. If you go through the darkest days, you will never give up the sunlight you long for. She fell, but she stood back up. If she did not, she would never even be close to where she is standing right now. This is one act of bravery I will remind myself when I face my fears and don’t know where to turn. Tessa has such a positive impact on this planet and she is continuing to be so.

I was exploding with joy and excitement the night before the Barbie 60th Anniversary event. There was warmth below the very depth of my heart that told me tomorrow was going to be an epic and unimaginably day!

I don’t think my interview with Tessa would have been as wonderful if I didn’t do enough research about her, and Erica Ehm, my lovely mentor, told me that you should know enough about the person you interview so the questions you ask are not just yes or a no answers. (Thank You Erica)! Before I met Tessa one-on-one, butterflies were dancing in my stomach.

When the elevator door opened at the CN Tower, there she was! (Yes, you guessed it; TESSA!)  It was as if angels were flying besides her, giving her this glimmering and breathtaking look. I was overwhelmed and my insides were jumping up and down. That night Toronto looked magnificent and the view from CN Tower was splendid. Tessa and I talked a little before the actual filming so we could get to know each other even better and make ourselves comfortable.

When I had the chance to sit down with Tessa, I asked her if she had a very favourite Barbie when she was growing up. Tessa said, “I had a Barbie who, in my mind, was a gymnast. She was flipping around, wearing different outfits, performing and competing. I took her everywhere with me. But the neat thing was, that same Barbie could also be an astronaut, doctor, or business woman.”

Everything in the interview went smoothly, but it was washing away too fast. During the interview, I asked Tessa, “what advice do you have for young girls?” What Tessa said resonated with me, as I’m sure it will with other girls as well.

She said, “my advice would be to dream big and think big. When you find something that you are passionate about, fearlessly pursue it. I think there is something about putting your head down, shutting out the noise and going after what it is you love.” Tessa followed her own advice it seems, making her and her partner the most decorated ice dancers in history.

In a blink of an eye, it was time to go. How hard to say goodbye but I know if I’m meant to see her again, I will. That is destiny.

Tessa Virtue is the light in many young children’s eyes. She motivated the young generation with her perseverance, dedication, and determination to pursue her passion as an ice dancer even after the twists and cuts she had to stand. She has a unique and lovely personality that attracts many people’s eyes. Even she looks like a shining star, her warm heart is beating as everyone else’s. Last but not least, as Tessa does, leave a little sparkle wherever you go!