9 of the Biggest Reasons to Love Terry Crews 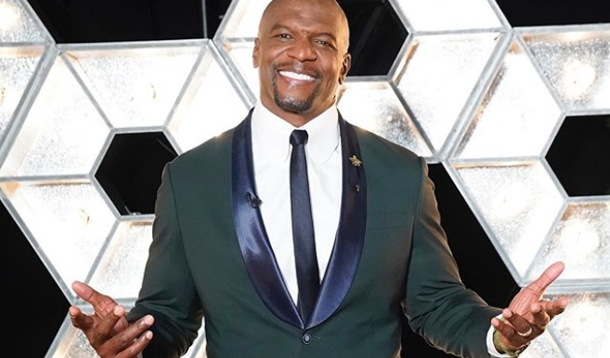 Whether you know him from Everybody Hates Chris, Brooklyn Nine-Nine, his many movies, or even his Old Spice commercials, chances are you love Terry Crews. Rare is a celebrity truly the whole package, but Terry is an entire Amazon warehouse full of awesome. In case you are having a hard time pinning down exactly why you love him, I have compiled a (not even close to comprehensive) list.

Terry is effortlessly funny. He can take us down with a facial expression, or a peck flex. He has an unmatched ability to not take himself too seriously, and let the comedy flow with confidence.

Terry is known for his cameos, and that is because he steals every scene he is in. Whether he is in the movie for two hours or two seconds, we remember his performance. He commands any screen he graces.

Terry has been married to his wife Rebecca King for twenty-nine years, this year. They have five children and one grandchild. The pair have weathered some storms, but Terry put his wife and his marriage first, owned up to his demons, and made the hard changes to save their marriage. He frequently talks about his deep love and admiration for his wife and children, and makes an absolutely adorable Grandpa.

Terry is the epitome of healthy masculinity. He is strong and sensitive. He is confident without being pathologically cocky. He is athletic and nurturing. Terry takes to Twitter and other media outlets daily to speak out against toxic masculinity and the harm it does to men and to society at large. He leads by example and shows what it means to be masculine without being sexist and harmful.

He bravely shared his survivor story to help others

When the #MeToo movement began to gather steam, Terry took a personal and professional risk by sharing that he had been sexually assaulted by a Hollywood executive.  Knowing that this could affect his career, he told his story hoping that others would know they aren’t alone, and to shine a light on the problem of sexual assault and harassment in Hollywood.

He is a passionate advocate for women

“How can we, as black men, expect and demand equality from everyone else- when the women in our community ARE NOT treated equally?” Terry asked on Twitter.  When he finds he has overstepped, “mansplained,” or engaged in oppressing women, he owns it immediately. After being called out on speaking for women by defending Gina Rodriguez when she was accused of silencing black women, Terry responded by saying, “You are right. It is not my right to stand for anyone when I'm not the offended party. I'M GOING TO LET WOMEN HOLD OTHER WOMEN ACCOUNTABLE. FORGIVE ME Y'ALL. I SPOKE TOO SOON.”

He holds other men accountable

Not satisfied to simply be a positive role model for men, Terry actively calls on other men to do better. He noted that after he told his survivor story, he received a lot of support from black women, and a lot of ire from men, and that showed him how far men have to go. When he speaks about toxic masculinity, he doesn’t stop at denouncing it, he holds men to task over their toxicity and challenges them to fight their own toxic behaviour. He addresses men as a cohort, and directly as individuals. He recognizes that the way to effect change is for men to hold other men accountable, and he lives this principle genuinely.

He holds his ground and stands up for his beliefs

Terry’s stance on toxic masculinity, and his decision to share his survivor story, means he is subjected to horrible comments on a regular basis from men who are less secure in their masculinity than he is. Many men chide him for not beating up the man who assaulted him. Others take issue with the way he calls out other men, particularly black men, for their toxic behaviour towards women. His manhood is questioned, he has aggressive insults hurled at him, and people can be generally awful to him – but none of it sways him. He seamlessly defends himself and firmly stands by his principles.

Sometimes this means letting go of people he once considered friends or mentors. When comedian DL Hughley made fun of Terry in his act for being sexually assaulted, Terry responded, “@RealDLHughley I have looked up to you my whole career as one of the funniest most talented people I’ve ever seen. I remember when I saw you warming up the crowd at FRESH PRINCE OF BEL AIR and I thought “this man is a genius.” But now you are an example of when comedy turns to sarcasm and cynicism. And you find it extremely easy to get jokes at someone else expense. You mock my success, but all I ever did was support you. You @50cent @unclerush and @tariqnasheed have decided my sexual assault was hilarious, whereas there are a whole generation of black women and men who don’t think it’s funny. ABUSERS PROTECT ABUSERS but they MOCK SURVIVORS as well. When you see me, keep it moving.”

He is unshakably enthusiastic

No matter what he is doing or what he is talking about, Terry is doing it passionately and enthusiastically. The energy that emanates off this man is palpable. Whatever he is selling, be it a product or a character, we want all of it. He is full of life, and we love it.

There are simply too many things to love about Terry Crews to fit in one article. If you have more to add, I encourage you to hop on Twitter and tell Terry directly. I’m sure he’d love to hear it.