Jameela Jamil is Having None of Your Sexist, Body Shaming BS 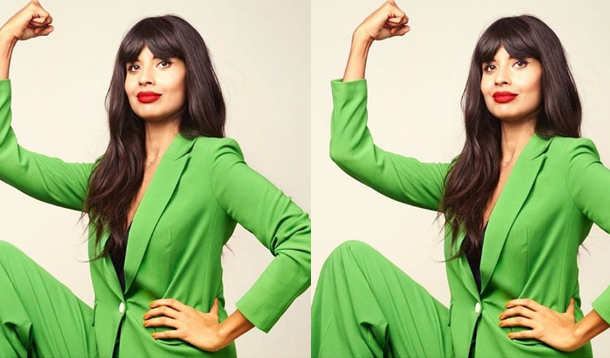 Okay, I admit it, I’m guilty of doing that thing that must drive actors crazy – I conflated a character with the person who played her. While I love the brilliant TV show The Good Place, Tahani is by far my least favourite part of it. Even knowing her character is supposed to be a little off-putting, I rarely find her amusing, and so by extension, I never gave much thought to the actress who plays her.

As it turns out, this was a big mistake. Tahani might be bland and one-dimensional, but Jameela Jamil is fierce AF. She first caught my attention as a real, live person (as opposed to the fictitious, dead one I was accustomed to) when she took a stand against detox teas, claiming they don’t do anything but give people, well, a loose caboose.

After calling out celebrities who promote them,  saying, “Give us the discount codes to your nutritionists, personal chefs, personal trainers, airbrushers and plastic surgeons you bloody liars,” she made an honest to Pete parody video of what happens when you consume these so-called miracle diet products.

What? A celebrity promoting actual science? Again, what? Jameela had my attention. Jameela got that all you need to detox is a liver and lungs, and she wasn’t afraid to criticize others who said differently. At first, I thought it was just about bogus claims (a personal pet peeve of mine), but the more I followed her, the more I saw she was a true champion of body positivity and realistic expectations instead of impossible beauty standards.

Jameela caused a bit of a stir when she called a post by Khloe Kardashian “sad.” Khloe’s post, which read, “2 things a girl wants: 1) Lose weight. 2) Eat," was meant to be cute, but was actually a good illustration of toxic body image and disordered eating.

Jameela was careful to attack the culture, not Khloe herself, saying, “This makes me sad. I hope my daughter grows up wanting more than this. I want more than this. Sending love to this poor woman. This industry did this to her. The media did it to her. They fat shamed her into a prison of self critique. Dear girls, WANT MORE THAN THIS. ❤️”

Swoon. How awesome is this woman? I mean, she wore jeans under her dress to the Golden Globes because, fashion be damned, she wasn’t going to be cold.

Most recently, Jameela openly criticized Avon for running an ad for a product called “Naked Proof” that claimed, “Dimples are cute on your face (not on your thighs)” and promised to get rid of cellulite. Jameela was having none of this body-shaming.

“Every body is beautiful, unless they have any 'flaws' I guess. What a gross abuse of the body positive movement. I want you all to look out for this constant manipulation. Once you see it, you can’t unsee it. It’s everywhere. You are constantly being manipulated to self hate,” she said, hitting the nail square on the head.

She had something to say about cellulite dimples too. “And yet EVERYONE has dimples on their thighs, I do, you do, and the CLOWNS at @Avon_UK certainly do. Stop shaming women about age, gravity and cellulite. They’re inevitable, completely normal things. To make us fear them and try to “fix” them, is to literally set us up for failure.”

Jameela didn’t just give outraged lip-service, though. She kept at it until Avon agreed not to use any of this wording on future marketing. While recognizing this was a good step, Jameela said “But also @AvonInsider please don’t promote a brand that markets itself as “Naked Proof” again.

None of us need to be told that anything should stop us from feeling good naked. It’s the most natural thing. There is nothing wrong with scars and marks and bumps. We are human. ??”

Have I mentioned I love her? All of this is awesome, of course. When is it not amazing to see strong women speaking their minds boldly and assertively? She even stood her ground when the inevitable trolls came for her, responding, “Yes. Are you afraid?” when one called her aggressive. But Jameela’s stance is even more significant. She is not just spouting off generic body positivity. She is calling out specific people, companies, and practices. She isn’t afraid to be controversial about it. She puts her money where her mouth is.

What’s more, although she has received some criticism for being “too thin” to be the voice of this movement, as a fat woman, I feel the opposite is true. As sad as it is, the allies with privilege are often listened to more than the people being discriminated against. I have been one of many fat woman being highly vocal about the same things Jameela is calling out, but because we are fat ourselves, we are often dismissed as being defensive, lazy, or unwilling to change. To have Jameela, who does fit a standard definition of beauty, advocating for all women, including fat women, adds clout to our voices. She validates us. As much as it would be nice for us to be heard on our own, we will take as many people, in as many shapes, as we can get.

And Jameela is quick to point out that, just because she is thin doesn’t mean she doesn’t understand the pressure to be objectively perfect, citing her own experiences with disordered eating and unhealthy relationships with her body image in the past.

Jameela also takes an intersectional approach to body positivity. When she preaches body acceptance and love, she means it beyond weight and superficial imperfections. She recognizes that race, gender, and sexual orientation often inform body image. She acknowledges ableism. As a woman who is both fat and disabled, this makes me feel seen.

Like her push for body positive practices, she stands by her words about ableism in practice. She recently turned down the opportunity to play a character who is deaf, saying, “It wouldn’t be appropriate for me to take that role and they should find a brilliant deaf woman to play that role. I think you have to make those choices and not be too greedy and make space rather than take space. I don’t want to be part of erasure.”

I’m sorry, Jameela, for ever thinking you could be anything like vapid Tahani. You have quickly shot to the top of my favourite celebrities, and people in general, list. Please continue this important work, and amplifying our voices. We will continue to amplify yours.

Every other celebrity with a platform, please take note. This is how it’s done.