Dwayne Johnson's Birth Announcement is How We Fight Toxic Masculinity

Cradling his baby girl, skin to skin, her tiny frame nearly lost in his massive muscular chest, he shows that tough guys can be gentle and sensitive. 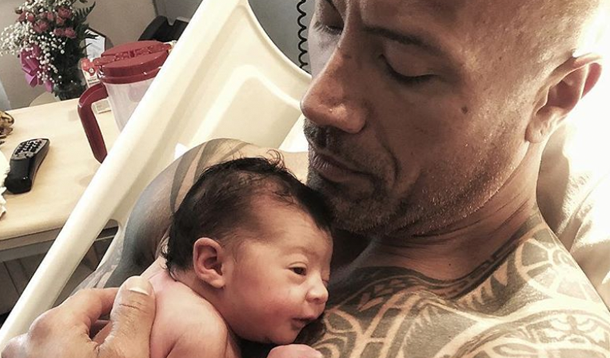 I admit it, I’m a celebrity baby news fan. I love hearing of pint-sized additions to Tinsel Town. I’m an especially big sucker for daddies and daughters. But beyond the initial cooing, I don’t generally dwell on these birth announcements.

When I saw the picture of Dwayne "The Rock" Johnson cuddling his brand-new baby girl, I thought it was adorable, and prepared to move on. Then I read the caption he wrote to go with it.

Skin to skin. Our mana. Blessed and proud to bring another strong girl into this world. Tiana Gia Johnson came into this world like a force of nature and Mama @laurenhashianofficial labored and delivered like a true rockstar. I was raised and surrounded by strong, loving women all my life, but after participating in baby Tia’s delivery, it’s hard to express the new level of love, respect and admiration I have for @laurenhashianofficial and all mamas and women out there. Word to the wise gentlemen, it’s critical to be by your lady’s head when she’s delivering, being as supportive as you can.. holding hands, holding legs, whatever you can do. But, if you really want to understand the single most powerful and primal moment life will ever offer - watch your child being born. Its a life changer and the respect and admiration you have for a woman, will forever be boundless. And to my third and youngest daughter, Tiana Gia - like I did when your two older sisters Simone Alexandra and Jasmine Lia were born, you have my word, I’ll love, protect, guide and make ya laugh for the rest of my life. Your crazy dad has many responsibilities and wears many hats in this big ol’ world, but being your dad will always be the one I’m most proud to wear. Oh and one more thing.. you’re gonna love rollin’ in daddy’s pick up truck. #TianaGiaJohnson #3rdDaughter #BlessesAndGratefulMan #ImInTROUBLE

“Blessed and proud to bring another strong girl into this world,” he starts. Strong. Not beautiful, as is the usual declaration of baby girls, but strong. As the father of three girls, he adds “another” to the description, recognizing he is already raising two other strong girls.

He goes on to talk about growing up surrounded by loving and strong women, and his admiration for womankind. He praises his partner and urges father-to-be to watch their children being born so that they can gain a boundless respect and admiration for women. He describes the moment of watching a child being born as life-changing, not just for bearing witness to the emergence of new life, but for showing men what women are truly capable of, and the strength they possess.

Dwayne finishes with a promise to his third daughter, like he gave to her big sisters, to always protect her, guide her, and make her laugh, and assuring her that of his many roles in this world, being her dad is the one that makes him most proud. Then he promises she will love riding in his truck.

And with this, The Rock presents a shining example of how to combat toxic masculinity. Cradling his baby girl, skin to skin, her tiny frame nearly lost in his massive muscular chest, he shows that tough guys can be gentle and sensitive.

He fights the all-too-prevalent trope of the dad with the baseball bat, out there protecting the virtue of his helpless, beautiful daughter. He declares her strong and promises to help guide her instead. He is going to raise her to take care of herself. A breath of fresh air after the recent viral photo of a man holding a gun next to his daughter and her prom date.

He allows the birth of his daughter to be a moment to empower women everywhere. He makes it very clear that not only is he not intimidated by strong women, he is in awe of them. Their strength doesn’t emasculate him, and neither does his own vulnerability.

The Rock is a sex symbol to women. He is a role model to young men. He has become a household name by exuding a strong, masculine image. By showing his respect for women, and acknowledging them as his equals in strength, he sets a standard for his daughters and for all women who look to him as an example of a male icon.

By allowing himself to show a softer side, he lets young men know that vulnerability doesn’t negate masculinity. The tenderness he shows to his daughters, his role as an active father, the way he speaks about his struggle with depression, it all adds up to show young men that it is okay to let down the macho guard and show some sensitivity.

It seems like a lot of weight to put on one Instagram post; but in a world where boys are bombarded with messages telling them to toughen up, and girls are taught to look for big, strong men to protect and dominate them, The Rock’s post plays a big part in combatting these harmful stereotypes.

Thank-you, Dwayne, for raising your daughters to be the strong women they deserve to be. Thank-you for recognizing the strength and power in all women. And thank-you for being an example to young men of what healthy masculinity looks like.