"She's a Damn Phoenix Rising": How Kesha Stole the Show at the Grammys

when one of us rises from the ashes, we all soar. 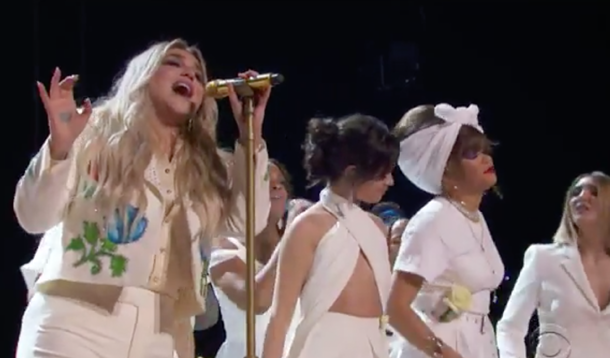 “She’s a damn Phoenix rising.” Singer Jessica Vosk put into words what we were all thinking after Kesha’s emotional performance at last night’s Grammy Awards.

I will admit, before 2016, I didn’t give Kesha much thought. I saw her as another flash-in-the-pan singer, living the party-girl life (or at least utilizing the image of it), comprised of very little substance. My young son and my kindergarten class frequently sang her grating earworms, adding insult to injury.

But when news of her legal battle with producer Dr. Luke surfaced, I began to pay attention. Though not a fan of her music, I certainly cared about her as a person as I would anyone facing adversity, and I was saddened by her plight.

In August of 2016, after spending years trying to free herself from a producer she alleges abused her sexually, financially, and emotionally, Kesha dropped her LA sexual abuse case, stating, “This lawsuit [has been] so heavy on my once free spirit, and I can only pray to one day feel that happiness again.”

She has not been released from her contract.

It was at this point that I stopped seeing Kesha merely as a fluff singer and more as a woman, battling to break free from an abusive professional relationship. Victimized first by the acts, then again by the courts, she is forced to continuing working for her abuser. If this were a marriage, she would be encouraged to flee her abusive spouse, but as this is a contract, she is held against her will. “The same opportunity - to be liberated from the physical, emotional, and financial bondage of a destructive relationship – should be available to a recording artist,” Kesha advocated.

But Kesha refused to be silenced. Despite being bound to produce two more albums for her alleged abuser, Kesha seized the opportunity to rise. She released her first single in four years – “Praying” - a declaration of independence.

While deeply personally meaningful for Kesha, the song became an anthem for the #MeToo movement, giving a voice to victims of sexual abuse everywhere. Shining light on the power of redemption and reclaiming your own strength.

Last night, Kesha took to the stage, broke our hearts, and healed them stronger than before. Alongside fellow powerful female singers Cyndi Lauper, Camila Cabello, Julia Michaels, Bebe Rexha, and Audra Day, Kesha belted out the pain of womanhood, and held us together with net of common hurt and compassion.

“after everything you've done I can thank you for how strong I have become”
thank you to the @RecordingAcad, the women on stage with me tonight, and everyone who has supported me through this whole journey. pic.twitter.com/43gOsofL0S

The image of the women on stage, standing as a group, musically and emotionally supporting one of their sisters baring her soul and speaking her truth, was an unmistakable symbol of the #MeToo and #TimesUp movements. A visual representation of the invisible threads woven by women making up an unbreakable tapestry. We are stronger together. Kesha’s pain and reclamation of herself were our own.

Tears fell in the theatre, and in living rooms. A visibly shaken James Corden acknowledged the impact as the performance wound down. Kesha struggled to keep it together as she recovered from her proclamation. We all understood.

Kesha didn’t write “Praying” to represent all women or even all survivors. She wrote it as a monument to her own strength, and her desire to move past her own personal hell. But as we have learned in the events of the past few months, when one of us is hurting, we all are. When one of us speaks out, we all lift our megaphones. When one of us cannot stand, we all become scaffolding. And when one of us rises from the ashes, we all soar.

RELATED: What to Tell Kids About Sexual Assault