I Have a Crush on Adele 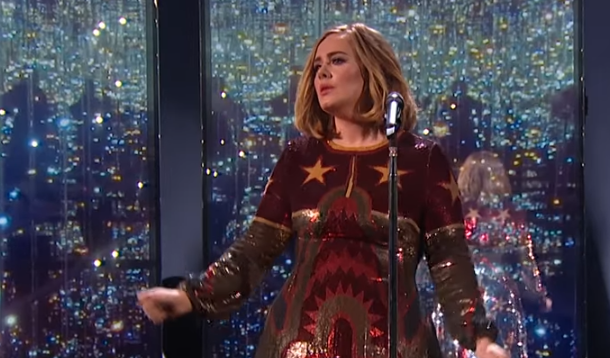 The last time I had a true celebrity crush, there were posters of Andrew McCarthy, River Phoenix (RIP), and the guy from Sixteen Candles (the one who looks like Matt Dillon but isn’t) all over my bedroom. As soon as I got my allowance, I would bike over to the corner store for Tiger Beat magazine, then ever so carefully rip out the pages before scotch-taping them to the wall beside my canopy bed.

The best ones went inside my school locker, because what’s the point of a crush, or an allowance, if it doesn’t make other 12-year-old girls jealous?

Back in the day, having a celebrity crush was totally acceptable. Even normal. Now, at 43, as much as I would love to plaster the space above my King-size bed (the one I share with my husband) with eight-by-ten glossies of Clive Owen, Daniel Craig, and Charlie Hunnam, I’m not sure how well that would go over on the home front. My daughters would ask questions I’m not ready to answer and my husband would be intimidated. And besides, those guys are just pretty faces. What really gets my heart racing these days is a brain, a sense of humour, big hair, and an even bigger bank account.

She’s so awesome even her last name (Adkins) didn’t put up a fight when her first name looked back and was like “Bitch, please.” From there on out, it was just Adele.

Twenty times in a recent Vanity Fair article, and probably more in her private life (which I hope to be able to verify at some point). Some celebrities overuse the word because they don’t know many others. Adele, like me, uses it freely and often because it’s fun and sometimes nothing else will do.

It’s part of her charm; it makes her seem so real and approachable. Punctuating your speech with bad words is like giving your audience some real bonus content, and it helps to emphasize that what you’re saying is really important, just in case they’re not listening.

Adele and her sweary awesomeness make me feel like my own penchant for profanity is totally normal.

She gives zero of those fucks about what other people think.

If she wanted to, Adele could probably launch her own line of car batteries. But so far, she hasn’t become that kind of celebrity who tries to do it all – the kind who twerks, designs her own clothing line, and has multiple endorsements. She also doesn’t care if her fans want to smell like her, so no perfume line either.

Seemingly without fear of judgment, Adele admits to suffering post-partum depression and to being “completely off her face” when writing the album 21. She’s doing the fame thing her way. She could’ve had it all, but she’s being true to herself. I have similar thoughts when refusing to put on clean pants in the morning, but it doesn’t work as well for me.

She doesn’t buy into the cult of perfect motherhood.

In the same Vanity Fair article where she dropped twenty F-bombs, Adele won my heart when she admitted not wanting to be around her child every minute of every day. She confessed to constant mom guilt and also said “I love my son more than anything but on a daily basis, if I have a minute or two, I wish I could do whatever the fuck I wanted, whenever I want.”

Well, shit. Who among us hasn’t thought, these little humans with their sticky hands and whiny voices are really quite cute but wouldn’t it also be great to just sit down and have a latte whenever I feel like having a latte? Wouldn’t it be great to have time to make and finish a latte? When you and I talk about how hard motherhood is, our friends and husbands get out their tiny, imaginary violins and start playing. No one cares. When it comes from a celebrity all of a sudden it’s like “you know, being a working mother is really tough. She’s such a good role model.”

Before baby, Adele sold millions of albums, won multiple Grammies and earned herself an Academy Award. After giving birth to her son, she returned to her quiet country home where she spends her days playing peek-a-boo around enormous piles of money.

AS IF. After baby, Adele returned to the charts with a new album and collected five more Grammies including Song of the Year for Hello. In her spare time, she launched a 43-city world tour and, we can only assume, collected and drank the blood of her enemies, which now renders her immortal.

Despite her success, Adele says she doesn’t care about money, which might be the only thing we’ll disagree on should when we become besties.

Can we just take a minute to appreciate those beautiful thick locks? I admit, I may be rolling in the deep end of creepy here, but you can’t deny she has incredible hair. Despite regular salon visits and product that costs more than my car, my hair usually looks like it has spent the evening being chewed on by my cat.

Yes, I know Adele has an army of stylists, hairdressers, and people who make her look good. But you can’t fake it entirely. If I could be Adele for one day, I would never waste it having sex with other celebrities, or lunching with Gwyneth and Beyoncé. I wouldn’t even go shopping at Barney’s or take the Range Rover out for a spin.  I’d simply lie around and touch my hair. Flip it, check the mirror, duck face, then flip it again. That would be my day.

Adele, if you’re reading this, I’m on Facebook. PM me and we’ll go for coffee. Or we’ll set fire to the rain, together.

Jen Millard lives in Markham, Ontario with her husband, two daughters and three badly-behaved pets. Jen is happiest when she’s got her nose in a book, a glass of wine at her side and a nap on the horizon. When she's not blogging, Jen is wondering how mascara marketers sleep at night and teaching college part-time. Socially speaking, Jen answers to @wineandsmarties or you can find her at www.wineandsmartiesblog.wordpress.com