Beyoncé is not the only one expecting double the trouble and double the fun. 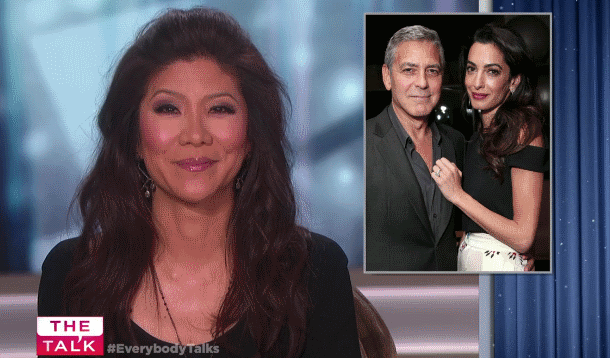 Speculation had been high in Hollywood gossip rags after she decided to opt for more loose-fitting clothing, but the rumor has been finally confirmed. Amal Clooney is pregnant, and she and George Clooney are expecting twins!

George and Amal's whirlwind romance was cemented by marriage in September, 2014, when they tied the knot on a trip to Venice, Italy. 8 months later, in May 2015, George was asked by CBS This Morning if he was thinking about becoming a father, but at the time, he said "Not really."

"I mean, I've thought about it, I suppose, but it hasn't been high on my list. I’ve been asked it a lot lately, because I've gotten married and I am doing a movie with kids in it. You should see how different, how creative the way they ask me!"

Well, there's nothing wrong with waiting and enjoying the Honeymoon phase. Kids come in their own time, and Hollywood is a little more than notorious for brief marriages and torrid love affairs. George and Amal celebrated their 2nd anniversary in September and thumbed the nose at the critics who said that their marriage wouldn't last.

Amal celebrated her 39th birthday last week in Spain together with George and his parents, Nina and Nick Clooney. The baby announcement was made this Thursday by The Talk host, Julie Chen, who told her audience: "The Talk can confirm that the 55-year-old superstar and his highly accomplished 39-year-old attorney wife are expecting twins."

Chen added that she had some exclusive information: "Now, what we did find out that no one else is reporting is that the twins are due this June. "

Amal has been carrying well and is looking fabulous. Congratulations to the happy couple, and we wish them easy delivery and good luck with juggling twins.

RELATED: Why George Clooney's New Wife Is An Amazing Catch