Scott Baio Wants Us to Grow Up, So Men Like Him Don't Have To 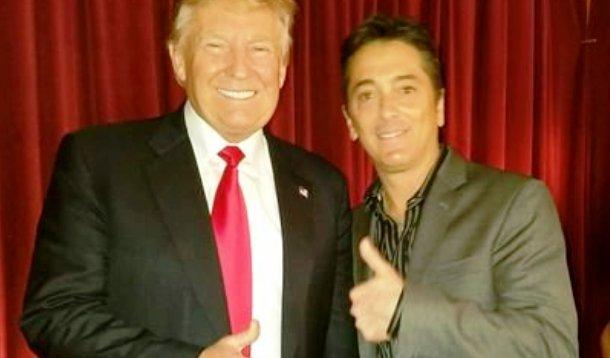 To have missed the spectacular explosion over Trump's talk about "grabbing women by the pussy"  (see video, approx. 1:20) means you've probably been hiding under a rock. On Mars. With your fingers in your ears.

In a sad way, this whole three ring circus has been fabulous. Why?

It's exposed how ignorant people are about rape culture in North America and how confounding the sheer number of women who have a story really is.

I wish, I really wish, that these cases were few and far in between - stories about men who go too far, who cat-call or grope, who make women uncomfortable just by doing these "locker room" things. But I have stories of my own, some recent. My friends have stories, some recent. Heck, even this past week, one of my friends confided in me that a guy she knew on Facebook was sharing her photos with other guys who weren't her friends.

Let's be real. What's the reason a guy would do such a thing? The only reason for a guy to share a woman's photos without permission to other guys is to reduce her to an object of their sexual viewing pleasure.

This friend wasn't her boyfriend, "showing her off" like a valued trophy and telling people about her great personality or how much he loves her. He was showing her off to other guys because she was on her friends list, he thought she was hot, and at the very least, he was doing a little territorial pissing, showing off his hot friend.

Are you jealous, bois? This is my friend. She's got the sexiest accent. I would totally bang her.

As the mom of a boy, and also the leader in some work capacities of a bunch of 20-something guys, boys? This is why women think so many of you are fucking creepy. I know what comes out of YOUR mouths when a woman you're not interested macks on you. You call her a psycho. A stalker. Fugly, weird, she freaks you out, you name it, I've heard it. But when YOU are doing it to women? You guys say it's "locker talk."

I call bullshit. I hear your locker talk. I can be just like one of the guys when I need to (it's always great to deal a little double standard discomfort back by bringing up Magic Mike). I still know, and so do most men, that there's a line that you just don't cross.

"I like Trump because Trump is not a politician; he talks like a guy. And, ladies out there, this is what guys talk about when you’re not around. So if you’re offended by it, grow up. And by the way, this is what you guys talk about over white wine when you have your brunches, so take it easy with your phony outrage. This is the way the world works. It’s not a big thing."

Are you kidding me? You are saying that all men act like a bunch of jizz-stained idiot Peter-Pan syndroming hormone balls when women aren't around... and we're the ones that have to "grow up."

Scotty, sweetheart, we're already obviously being the fucking adults around here. Not only do the women have a right to be pissed off, so do a bunch of your partners-in-penis who might not want to be associated with a bunch of crude hairy-knuckled mongoloids who think cavemen had it right when it comes to romance.

Let me explain it in simple terms, cause we know a bunch of your kind still think fart and poop jokes are funny: if there's no consent, there's a crime.

You want to tell your buddies in the locker room about the woman who consented to go home with you from the bar? That's locker room talk. Do you brag about the woman who didn't want to go home with you from the bar and you pushed yourself on her for a kiss and a grope anyway, and perhaps you got her incapacitated to the point where she couldn't resist you and you snuck in sex, and it's OK cause you bought her drinks and she owed it to you?

Of course you don't. IT'S CALLED SEXUAL ASSAULT AND RAPE. THAT is the line you don't cross.

One is disgusting, the other is a crime.

It's pretty fucking simple, and there's no phony outrage about it.

Rape and tolerating sexual assault is not how the world we live in works, Scott Baio. Even if we've got huge problems with rape culture, it's still considered a crime. Donald Trump wasn't talking about grabbing his groupies by the pussy. He was talking about how his rich white male privilege earned him the "right" to do what he wanted if he thought they were attractive. Even if they were married. Even if they were just there, minding their own fucking business.

It's not OK, and it is a big thing, and no, we don't talk about grabbing random strange men by their packages over white wine.