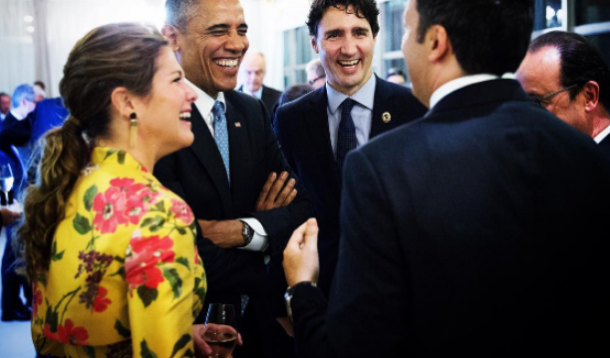 Fashion inspiration often comes from the most unlikely of places, and this summer's best trends combine two of the most unusual bedfellows: modern politics and vintage rock.

When it comes to effortless class and poise, there is perhaps no greater female icon to watch right now than our very own Sophie Grégoire Trudeau. Her fashion choices have been making waves at home and abroad, all while putting homegrown Canadian designers on the map.

During a recent visit to Japan, for example, Grégoire Trudeau sported an eye-catching Wayne Clark dress along with a pair of gold Ava heels from Toronto-based Zvelle — the same brand she wore (in different colours!) for the Trudeaus' visit to the White House back in March.

That meeting with the Obamas might be best remembered for the ladies' fashion itself: Sophie in a purple-and-orange Lucian Matis number, Michelle in a strapless Jason Wu dress, both Canadian designers. These diplomatic women are known for making a habit out of incorporating politics into their personal styles in the most graceful of ways.

The Romanian-born and Toronto-based Lucian Matis couldn't be happier that Grégoire Trudeau chose two of his dresses for the couple's Washington, D.C., visit. "I love her effect," he told the National Post. "People really look up to her and constantly check out what she's wearing."

That might be the understatement of the year. The red floral-print Matis dress that Sophie wore for the D.C. welcome ceremony sold out almost instantly after she made her public appearance in it. And shoe designer Zvelle now has a long waiting list of customers looking to get their hands on some Ava high heels.

A photo posted by Sophie Gregoire Fashions (@houseofsophietrudeau) on Mar 10, 2016 at 9:52am PST

Grégoire Trudeau's influence as a fashionista has everything to do with the way she epitomizes her Prime Minister husband's political brand: young, forward-thinking, and fresh. There's even a blog dedicated to following Sophie's style, which is a perfect bed of inspiration for that classy diplomatic lady lurking inside of us all.

But on the other hand, summer fashion is all about letting loose, too. Not all of us will be spending the season attending galas and dinner balls. If you think that $425 for a pair of designer shoes might be better spent on a summer getaway, that's your prerogative — and you'd be in good company: 82% of all affluent vacationers say that leisure travel is important to their overall sense of well-being.

The good news is that, at the other end of the fashion spectrum this summer, casual '90s vintage is way, way in. It's time to start digging through your closet to pull out all those pieces you might have thought were dead and gone forever.

Stars like Rihanna, Taylor Swift, Kendall Jenner, and Bella Hadid are all reinvigorating the dream of the '90s in a big way this summer. Think choker necklaces and chunky sandals, denim minis and slip dresses, even the most comfortable fashion statement of all: the tracksuit.

If you didn't think ahead enough to save all that '90s gear the first time around, you can always hit up the local vintage store -- just don't expect the prices to be as threadbare as some of the t-shirts.

CBC News recently gave an inside look at the dog-eat-dog world of resale vintage clothing, where an old pair of Levi's can sell for thousands of dollars and young people are paying pretty pennies for busted old punk designs.

"We sell what the kids want," said Jesse Heifetz of F as in Frank, a vintage boutique with an online shop and brick-and-mortar locations in Vancouver and Toronto. And they want originals, not knock-offs, he said. "It's the difference between getting a classic car and one of the remake Ford Mustangs."

The car analogy is very apropos. Some fashions, like old cars, just never go out of style. Some come back in waves in a nostalgia-fueled frenzy. And some are all about looking forward.

If old jeans and rock tees are this summer's muscle cars — sexy and fun, though maybe a little worn around the edges — Sophie Grégoire Trudeau is the hybrid vehicle. Not only is she all about saving the world, like a hybrid that produces 90% fewer pollutants than a regular car, she does it with a perfect balance of modern flair and classic beauty.