What Judy Blume Taught Me

... and why I'm eternally thankful 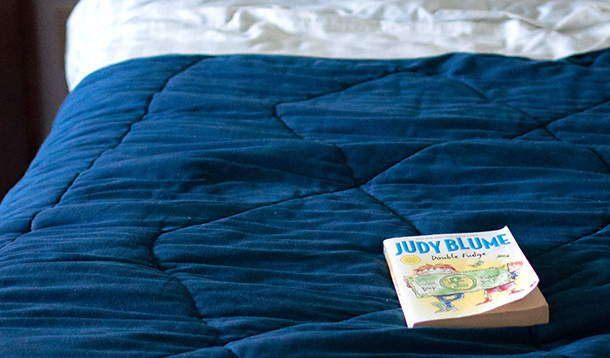 When I recently heard that Judy Blume's Are You There God? It’s Me, Margaret would be made into a movie, with the author's blessing, my heart leapt. At first. Now, after some thought, I’m feeling trepidatious and protective. Will they do it justice? Do they know how much that book means to generations of women? Will they treat it with the respect it deserves, or will they modernize it too much and make it too “family friendly”?

Judy Blume, after all, played a pivitol role in my young life, and in the young lives of so many people who grew up in the era of her work.  She spoke to us. She spoke for us.

Blubber. Well, that was one way to put it. Judy Blume pulled no punches. When my mom suggested I read this book as a child, I wasn’t sure if I should take it as a helpful book recommendation or an insult (et tu, Mama?).

I was a fat kid, so sure, give me a book called Blubber. Why stop there? I was shy too, did she write a book called Awkward Loner as well? But feeling personally attacked aside, I read the book. And I loved it. I more than loved it, I felt it with my soul. Who was this Judy Blume person, and how did she get me so?

I started looking for her name on more book spines. Tales of a Fourth Grade Nothing. Hmm. I was in second grade, but I was precocious, let’s give it a shot. And that’s when Peter Hatcher became the love of my young life. I devoured the book, and every book in the Fudge series, even the one from seemingly antagonistic Sheila’s perspective.

Never before or since had a set of characters gripped me so. Peter was real to me. He was me. We may not have shared the same life experiences, but he was every bit as relatable and three-dimensional as the real people in my life. And truth be told, I didn’t have a lot of friends, so I was happy to have Peter along for the ride.

Peter and Fudge didn’t just inspire me to read - they inspired me to write. The first story of any substance I remember writing was inspired heavily by the Fudge series (and in fairness, an episode of Full House). It had a beginning, middle, and end, and a legitimate story arch. My teacher gave it an A+++ (a-thank-you.)

The seeds of my career as a writer were planted and watered by Judy Blume.

It didn’t stop with Peter, Fudge, and Sheila. There was also Margaret.

As I thumbed the pages of Are You There, God? It’s Me, Margaret, I sighed each of angst-ridden Margaret’s sighs. I questioned each of her questions. I related to her, despite the generational gap between us. Margaret grew up in the 60s and I was reading the book in the late 80s. I was right there with her right until she got her period.

I knew what a period was. I was younger than Margaret, and I had a year or two to go before I learned that particular angst first-hand, but I had progressive parents who had well prepared me. But what was she talking about with belts and buttons? I began to panic as Margaret struggled to attached her sanity pad with what seemed to my technologically advanced brain to be unnecessary contraptions.

I hadn’t worried about getting my period before, but I also hadn’t realized there would be belts and buttons. Some quick reassurance from my mother that pads had come a long way since then and now attached via an adhesive strip put me at ease. But in that moment, I felt Margaret’s pain.

Iggy’s House confused me. It was about a “negro” family moving into a white neighbourhood. I read the entire book unaware of what negro meant, and being innocent of the notions of racial intolerance or segregation.

Iggy’s House hit me in retrospect. To realize how much progress had occurred between its publication and my reading of it that I had no idea what it was about touched me. Then to reflect as an adult on how little progress had really been made after all gutted me. I would later read the book to a group of largely African-American elementary school children, and have an open, honest, and moving discussion about race.

Freckle Juice was ridiculous and a much needed humourous distraction for my forty-year-old brain trapped in an eight-year-old’s body, while Just As Long As We’re Together made me feel like a grown-up. I was in fourth grade, and it was the longest book I had ever owned. It was about middle-schoolers. It discussed sex and body image and all the things my nine-year-old self wondered about but dared not ask. I read it on the school bus, a place that usually reminded me of how alone I was since no one ever wanted to sit with me.

Judy sat with me. She reminded me I wasn’t alone.

That's why, when I heard they were making a movie of Are You There God? It’s Me, Margaret, my excitement quickly changed to hesitation. I really don't want them to screw it up.

What we need you to know, movie-makers, is that Margaret is not a fictional little girl. She is the embodiment of us. We are twenty, thirty, forty, fifty, even sixty now, but she still lives in us. We are well past getting our first periods – some of us may even have had our last ones – but we remember that scene, and we will take it personally if you don’t do it justice. We will be unforgiving if you don’t treat our Margaret with respect.

And more than Margaret, Judy Blume is our mentor. She is our mother, our aunt, and our friend. She shaped our childhoods and helped us grow into strong, independent women. And if you give her a hard time during this filming, or ignore her vision for this film, we will remember it. And we will defend her. Just as she defended us when we were young, and confused, and felt like we were the only little girls in the world.