Got Girls? Get "The Care and Keeping of You" and You Won't Regret It

This book has quickly become a fave in our house 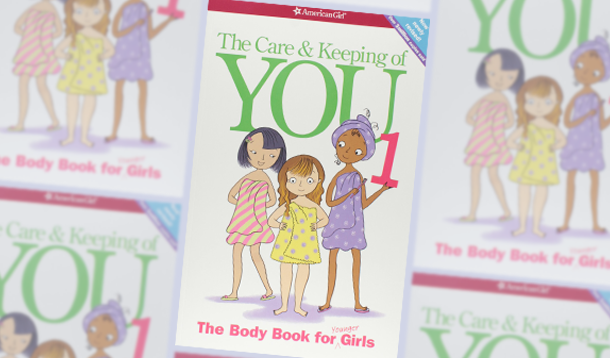 I am very much of the mindset that we should be open with our children about their bodies and about puberty. The thing is, I’m about 30 years removed from puberty and can’t remember all of the things that I experienced way back in the day.

Not to mention that the extent of what I was told by my own mother was ‘you’re getting breasts. You’ll get your period soon.’

The fact is, a hell of a lot more than getting my period happened between the ages of nine and 16, and I probably figured out what to do with all of those things far later than I needed to because I just had no clue.

Recently, my nine-year-old has shown some early signs of and interest in puberty. It’s only a matter of time before overt signs, you know, beyond the pre-teen snot-ballery I’m already dealing with, start to show.

I was beyond grateful when I reached out to a group of friends with similarly aged girls and they recommended the book, The Care and Keeping of You. If you have a pre-teen girl, this is your bible. Actually, no. it’s her bible. You should see my daughter’s. The cover is totally warped from her having it open and pouring over the whole book, multiple times.

I recommended it to my friend, who told her nine-year-old there was this great book for her to read, and she refused. So, my daughter brought the book to her house and showed it to her. She’s asked for her own copy. My daughter has asked for the next in the series.

Why? Because this book is the bomb! It’s not a ‘you have breasts. Prepare to start your period.’ It is SO much more than that.

From starting to have body odor, needing to shower more, what will happen to your body as you go through puberty (your hips will grow, your waist will shrink, your legs will grow faster than your torso), that you’ll get hair in new places, how to manage that hair, the progression of breast growth, the emotional changes, the changes in your hair, changes in skin, overall hygiene and on and on and on – this book covers it all. It covers the stuff I wouldn’t have even considered mentioning to my kid who is willing her period to show up tomorrow.

The fact it is from the American Girl series was the gateway to get my daughter to be willing to pick it up all, but, let me tell you, by the time she was finished she was all ‘mom, did you know that …..’ whatever fact she had just learned from her reading of the book the night before.

She even started to try new foods because the book explained that fruits and vegetables are vital to proper growth and development in young bodies. She hates both those things. But she wants to grow into a healthy teenager. Thanks book!

What sets this book apart from all of the other books about puberty out there, is the fact that it’s not written to educate. It’s not. It’s much more about providing information that will help young girls feel more comfortable with what is happening to their bodies and their brains. It’s more of a guide than a text book. It’s like a big sister who sits down and has a heart felt chat to help prepare the young pre-teen to not feel so weird and alone and confused by everything that is about to happen to them.

Trust me, if you have a young girl on the brink of puberty, this is the book you want to get them. It’s not a sex ed book. In fact, it doesn’t even broach the subject of sex at all. The focus of The Care and Keeping of You is meant as a guide, and a conversation-starter. It has triggered many thoughtful conversations in our house.

Get this book if you have a pre-teen girl. Trust me, she’ll love, you’ll love it, and you’ll both learn more than you realized about what’s about to start happening in both your lives.