Zeba Khan: She Shopped, She Scored

Where Will You Shop Once JACOB Closes All Canadian Stores?

The Montreal-based company has filed for bankruptcy 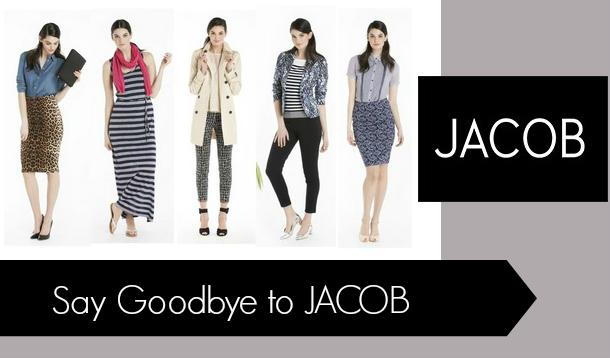 There were gasps of disbelief at Yummy Mummy headquarters when news of JACOB's closure came to light. Meatless Mummy Con Carne, Nicole Macpherson wondered "Where will I get my myriad black sweaters from if not there?" Mummy Buzz declared that she could only leave "the house in a paper bag now" while copy editor Adina Moss simply wailed "What???? Noooooooo!"

Sad but true, after 35 years of operation, JACOB has filed for bankruptcy and will be liquidating inventory in their 92 stores across Canada. The privately owned family company founded by Joey Basmaji in the seventies began its Canada-wide expansion in the mid-eighties. However, financial troubles surfaced in 2008 as international competitors and a sluggish economy resulted in JACOB closing 52 of its stores. By 2010, JACOB had to place itself under creditor protection and undergo operational restructuring.

Unfortunately, despite their best efforts, JACOB was not able to return to profitability, and on May 6, 2014, president Joey Basmaji issued a press release stating "Although we did not achieve the desired result, I am proud of the passion and dedication that the Jacob team showcased over these past few years while trying to bring the company back to financial health...I would like to sincerely thank each employee and business partner that contributed to our success during these 35 wonderful years. I hope that the remaining Canadian retailers will get through these difficult economic times."

Where does that leave us as consumers? Hopefully we'll be able to stock up during the liquidation sales — but who should we turn to for our future clothing needs? Try checking out LOFT, White House Black Market, Banana Republic, and Club Monaco. While they may never fully replace JACOB in our hearts, they can keep us well-dressed as we learn to love again.

Where will you be shopping now that JACOB is closing down?

Read about how this store has successfully stepped up its strategy.