What Was That Number Again? 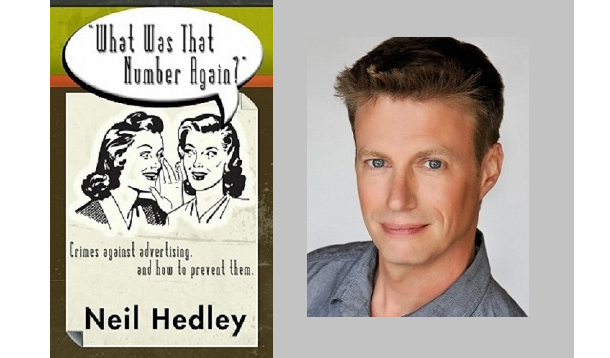 Do you love to listen to the radio? What about the commercials? Do you turn the channel as soon as a particular advertisment comes on? Are there some catchy jingles that just stick in your head? What's with all these questions? Well, did I get your attention? We could all probably share a few likes and dislikes when it comes to radio ads. This is where I get to introduce you to this very accomplished but very modest Canadian treasure named Neil Hedley. Neil has over 30 years of radio broadcasting and he's finally sharing his experiences and opinions in a book called What Was That Number Again? Crimes Against Advertising and How to Prevent Them. Read on to find out more about the book and Neil's fantastic career as a radio copywriter and multi-talented jack of all trades!

What or who drove you to share your 30+ years of experience in radio?

I actually talk about this in the very beginning of the book.  I was sitting having lunch with my wife Tatiana, and three of our friends (Kathy Buckworth, Theresa Albert and JoAnne Wallace).  At some point, the conversation shifted to an examination of why I was still dragging my butt out of bed at 4 in the morning to go do a radio show, when after a 30-year career and a string of #1-rated shows I should have written books, done speaking tours, and whatever else I wanted.
Truthfully the only answer I had was a lack of confidence.  I've never been particularly good at believing in myself.  But my wife came into my life within a few weeks of my mother's very sudden passing.  And all at once, a confidence I'd never known before started welling up inside me.  It was almost as if, by losing my Mom, a voice inside me said "You don't have an unconditional fan anymore; you have to earn your pats on the back and stand up for yourself."  Suddenly I was surrounded by all these amazing people (like Kathy et al) who made me feel like I was one of them.  And the idea of writing the book became a no-brainer.
I still have trouble believing in myself, but at least now I can summon up the courage to fake it when I need to.

Aside from aspiring radio copywriters, people in advertising or marketing and everyone taking media studies, who else should read WHAT WAS THAT NUMBER AGAIN?

Anyone who's ever watched the SuperBowl for the commercials.  Anyone who has ever turned on the radio and wondered why a car dealer is yelling at them.  Anyone who's ever had to create anything for work that was meant for consumption outside of their workplace—commercials, PowerPoint presentations, flyers, Facebook posts, even a 'Help Wanted' ad.  Because while the book deals a lot with examples from radio and television, the principles it lays out apply to everything.

What stories didn't make it into this book? Don't hold back!

My intention was to avoid pulling punches.  In fact, I think it says that right on the back cover.  And yet, inside, there are a couple of punches that get pulled.  Because much like there are people who claim to be "social media gurus" who have no more professional credentials than my 7-year-old, there are many people in businesses both large and small being given advice by people in the ad industry who are, by way of a timely description, snake-oil salesmen.  I've seen ads run by all sizes of business that actually alienate and offend customers instead of attracting them.  And I realized there were a few examples I used in the book where I think a retailer had been duped by an advertising company that pretended to know what it was doing; those were the times when I held back on naming names.
But you know what really irritates me lately?  The people who get up on their "marketing" high horse and look down on advertising, as if it is somehow beneath them.  They pretend that advertising is for neanderthals, and that enlightened companies can grow successful businesses with cool Facebook pages, carefully crafted mission statements and empowered customer service people.
The best way I can describe it is this: Remember when the TV show "Seinfeld" first started, and people were falling all over themselves to get to comedy clubs?  The comedy boom wore off, because there was a massive demand for live comedy, and insufficient supply of comedians who were worth paying to see.  Advertising was like that.  People heard commercials for Al Palladini, saw commercials for McDonalds and they started doing ads too, even though they were wholly unqualified to do so.
The truth is that advertising is a critical piece of the marketing puzzle, and the reason there are so many people throwing rocks at the ad industry right now is because there's still massive demand, but insufficient talent.  People don't fast-forward through the commercials on their video recorders because they hate the sponsors; it's because the overwhelming majority of commercials suck, and very few people making their living as "marketing geniuses" have the skill set to turn the ship around.  It's the same reason that most television reviewers have never made a television show, most Broadway critics have never acted, and most fashion critics wouldn't be able to design a napkin.  It's very easy to stand on the sidelines and throw rocks at something you can't do.

What do you think the future holds for advertising in radio broadcasting and what's next for Neil Hedley?

There's been a lot of noise about this lately.  Despite what you might read from the "oracle of the week," the Internet is not about to replace television.  Radio's not going anywhere either.  We've been hearing that radio was on its last legs ever since they started putting 8-track tape players in cars.  Those "experts" were wrong, too.  In the 1960's, ad genius David Oglivy said that television had rendered radio "obselete." Really, David?  Tell Howard Stern that.  Tell Rush Limbaugh's 20 million listeners that.
What I think will happen soon in television, is that we'll go back to the early days of TV when "product placement" was the most widely used form of advertising.  Jack Benny, Bob Hope and countless others used to have characters that would come on their shows specifically to pitch a product.  It was primitive by today's standards, but it worked.  As an example, I think the X-Box people will stop buying time nationally for commercials to run during Big Bang Theory, and will instead pay the producers a fee to have Sheldon and Leonard mention or play a different X-Box game every few episodes.  Hard to fast-forward through it if it's weaved into the show in a way that's not heavy-handed, cheesy or deceptive.
What's next for Neil Hedley?  That's funny, because we've been discussing that at my house lately.  To be honest, there are days when I feel like 32 years in the public eye is more than enough, and it's time to find a gig where no one has a clue I'm there, and my name isn't on a single thing except a list of phone extensions at the receptionist's desk.  But, like the radio business itself, I'm probably not going anywhere anytime soon.  To that end, there's a second book in the works, also about radio but more about the music, and the music industry's relationship with radio.  That one's a more massive project and it's something I've already been nibbling at for about eight months now.  And I'll keep hanging out at CTV for as long as they'll let me.  Because of the book, I'm starting to field calls from radio companies all over the place who want me to come in and do one-day workshops for their clients, which could be a lot of fun.  And if I can find a decent piano player, I'd love to start singing again; maybe even a little "Rat Pack" combo.

Wow—that guy sounds cool.  I'd like to meet him.  He's not the guy that stares back at me in the mirror, I'll tell you that.  One thing I really want to do (beside spend more time with my kids and my wife), is to do more work with charities.  I used to do this crazy stunt when I worked in Waterloo (circa 1994-98) where I would get up on top of a roadside billboard in the dead of winter and live there in a tent for a month at a time.  We did it as a fundraiser for the United Way.  I took that project to the United States with me in 1998 and did it there for several years as well.  My "world record" came about in 2005 when the radio station we were working with bailed out before a billboard event and we did it anyway, on an Internet radio station we built.  Six figures later, it became the largest local fundraising event in the history of Internet radio (a record I believe stands to this day).  Over the years of doing that stunt I've been shot at, assaulted, blown away by an impromptu visit by Doug Gilmour and the Toronto Maple Leafs, and within an inch or two of being blown into the middle of an Interstate during a tornado (picture Lieutenant Dan atop the mast in Forrest Gump).  In a sick, twisted way, I kind of miss it.  But I especially miss working closely with charities to shine a light on what they're doing.
ABOUT THE AUTHOR
To find out more about Neil Hedley and his work you can visit his website neilhedley.com. You can find What Was That Number Again on Facebook, follow @NeilHedley and the #WWTNA @writegreatspots account on Twitter.
AUTHOR APPEARANCE
There will be a What Was That Number Again? book launch party on Saturday, February 25th at Caesar Martini's in Waterloo, Ontario! Check out the WWTNA guest list for the invitation and more information. For a limited time you can get in on a special offer for a signed copy of What Was That Number Again? by clicking here to order!
BOOKALICIOUS BOOK GRAB GIVEAWAY
Neil Hedley has signed copies of What Was That Number Again? to give to 3 lucky Bookalicious readers! To enter the draw all you have to do is leave a comment in the "click here to spill it!" bubble below. Good luck!
Yummy Rules and Regulations
You must be a Yummy Mummy Club member to win. Click to sign up! It's free and filled with perks. One comment per member. Entries accepted until March 5th, 2012. Contest open to Canadian residents. Winners will be picked using www.random.org. Please mark the email [email protected] as a "safe sender" when you enter a Bookalicious giveaway and respond within 1 week to claim your prize. For more details on upcoming book news sign up for the Bookalicious Newsletter!
If you enjoyed this article then you might want to check out Buzz Bishop's post about a controversial radio contest.
Relish reading,
Wanda Lynne Young
Category:
Culture - Books
Tags:
Bookalicious
Wanda Lynne Young
What Was That Number Again
Neil Hedley
radio
advertising
marketing
television
entertainment
ads
copywriter
Canadian author
Kathy Buckworth
theresa albert
Buzz Bishop