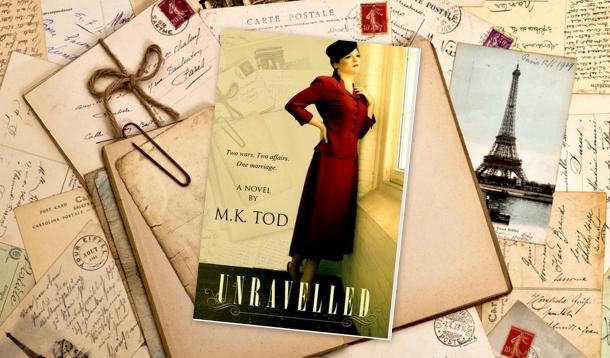 If you have an addiction to historical fiction and an appreciation for Canadian authors well then, I have a treat for you! M.K. Tod has released her debut novel that spans two wars and involves two affairs that rattle an already war-torn marriage. UNRAVELLED weaves fibers of sights and sounds to unveil a unique tapestry that depicts both the horror of war and the healing power of the human heart.

I asked M.K. Tod to share 5 WWI novels that impacted her writing and she is gracious enough to share them with us along with a book giveaway so read on for more details!

I write about WWI. A woman who hated history in high school, studied math and computer science and worked in business for thirty years. Go figure! Nonetheless, here I am busily engaged in a second career writing historical fiction in WWI settings.

A huge leap is required to turn your life upside down and do something completely different and I had a lot to learn about war. Beyond the usual internet sources and history books about those times, five novels stand out for the beauty of their writing, their evocation of sights and sounds and the tidbits of historical detail that are seamlessly woven into the stories. I’ve read these five, reread them, unlined sections and even marked particularly interesting pages with little yellow stickies. They are my go-to source whenever I need an injection of WWI atmosphere to spark my writing.

Anne Perry’s WWI SERIES: I read AT SOME DISPUTED BARRICADE before realizing it was the fourth book about the Reavley family and a shocking conspiracy at the highest levels of British government. Now, I’ve read them all and not only are the story and its central mystery page turning, but the author brings the war to life from different angles: nurse, war chaplain, soldiers, politicians, those in the secret service.

“Every now and then star shells went up, lighting the landscape, with its jagged tree stumps, erratic gouges out of the clay now filled with mud and water. There were wrecked vehicles by the side of the road and here and there carcasses of horses, even sometimes helmets to mark where men had died. Broken gun carriages and burned-out tanks showed up in the glare, and once the barrel of a great cannon sticking up out of a crater, angled at the sky.”

REGENERATION by Pat Barker: I began with Pat Barker’s LIFE CLASS and then read REGENERATION, a novel that has won awards for its powerful writing and exploration of war’s effect on the mind and soul. It is based on real experiences of British officers like Vidal Sassoon who suffered from shell-shock and were treated at Craiglockhart War Hospital. The REGENERATION TRILOGY includes two other novels: THE EYE IN THE DOOR and THE GHOST ROAD.

“Sometimes, in the trenches, you get the sense of something, ancient. One trench we held, it had skulls in the side, embedded, like mushrooms. It was actually easier to believe they were men from Marlborough's army, than to think they'd been alive a year ago. It was as if all the other wars had distilled themselves into this war, and that made it something you almost can't challenge. It's like a very deep voice, saying; 'Run along, little man, be glad you've survived.”

BIRDSONG by Sebastian Faulks: I’ve rarely been in a conversation about WWI without someone mentioning BIRDSONG. Its renown has reached almost mythical proportions. The novel begins in 1910 with a young Englishman who arrives in Amiens for work. A clandestine love affair tears apart the family with whom he lives and sets the stage for his war experiences. A compelling tale of the human spirit and a condemnation of war.

“He was awed by the sound the guns were making; so many of them in rolling sequence on a line of sixteen miles, the heaviest providing the continuous rumble like a sustained roll of timpani, and the lighter adding unpredictable pattern and emphasis. Within an hour the whole line was pouring out shells, filling the night with a dense traffic of metal. The noise like thunder breaking in uninterrupted waves.”

THREE DAY ROAD by Joseph Boyden: This haunting story combines the experiences of two Cree snipers in the battlefields of Ypres and the Somme with the journey one of them takes to get home after the war. Joseph Boyden is a celebrated Canadian author whose writing deserves words like powerful, passionate, extraordinary and inspiring.

“You hear the thunk of a mortar land close to you, know you can run away from it if you’re quick. It’s the only bomb you can do that with. The big shells you can hear coming from a long way off and just pray that they aren’t heading for you. Now listen careful, boys, it’s the smaller shells, the whiz-bangs, that are the most damaging, the ones that sound like a mosquito whining in the distance. You hear them coming and you dive flat into the earth and bury your nose deep as you can into the mud.”

THE FIRST CASUALTY by Ben Elton: Elton gives us a story about a man who investigates a murder amidst the Third Battle of Ypres. It explores some fundamental questions: What is murder? What is justice in the face of unimaginable daily slaughter? And where is the honour in saving a man from the gallows if he is only to be returned to die in suicidal battle?

“Kingsley was now only a hundred yards from the front but the going was very slow. First he had to traverse along the reserve trench in order to reach a communication trench that would take him up to the support line. The trenches were fashioned in a zigzag pattern resembling a series of cogs: viewed from the air, they would appear like a battlement stretched out across the ground. This design was to minimize the effect of the blast from a shell landing directly in a trench and exploding out along it, or of the enemy getting in and setting up a machine gun which could then rake along the line.”

I could continue quoting from these novels to show how they illuminate the sights, sounds, smells and conditions of war as well as everyday matters such as how to assemble a rifle, walk along duckboards, make tea in the midst of filth, comfort a wounded soldier, reinforce a trench, heft a sandbag, don a gasmask, lay wire for signaling purposes and on and on. These aren’t the only novels about WWI that I’ve read but they have inspired my writing and will continue to do so.

M.K. Tod had a successful business career until a move to Hong Kong prompted an unexpected hiatus. Using that time to research her family history ultimately resulted in UNRAVELLED and a new career as a writer. Beyond her debut novel, Mary has written two other novels with WWI settings. She blogs at A Writer of History and is a book reviewer for the Historical Novel Society. In 2012, Mary conducted a unique international reader survey on the topic of historical fiction.

UNRAVELLED: Two wars. Two affairs. One marriage. is available in paperback and e-book formats from Amazon (US, Canada and elsewhere), Nook, Kobo, Google Play and iTunes.

You can check out what readers are saying about UNRAVELLED and read an excerpt with chapters 1 and 2.

A book launch event for UNRAVELLED will be held on Tuesday, October 8th, 2013 starting at 7 p.m. at the Duke of York at 39 Prince Arthur Avenue in Toronto, ON, Canada.

We have a copy of UNRAVELLED to give away to a lucky Bookalicious reader! To enter, all you have to do is leave a comment in the "Click Here To Spill It" bubble below. You have until October 28th, 2013 to enter. You must be a YMC member, and please be sure you've registered your email address in our commenting system so we can contact you if you win.

Yummy Rules and Regulations: You must be a YummyMummyClub.ca member to win. Click here to sign up. It's free and filled with perks. One comment per member. Entries accepted until October 18th, 2013. Contest open to Canadian residents (excluding Quebec). Winners will be picked using www.random.org. See full contest rules.

For more details on upcoming Bookalicious news, reviews, and interviews sign up for the Bookalicious Newsletter!