An Evocative Tale Of Tragedy, Truth and Triumph 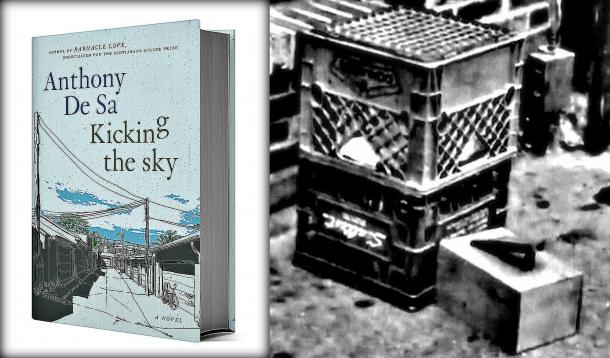 It was the year 1977. On a steamy August night, 12-year-old Emanuel Jaques goes missing from the notorious Yonge Street strip in downtown Toronto. His family immigrated to Canada from the Azores to start a new life in the Portuguese community. Emanuel was shining shoes with his brother and friend when he was lured away on the promise of extra cash to move camera equipment. He was never seen alive again. Emanuel's body was discovered four days later on the roof of a tavern. This crime was coined as the "Shoeshine Boy" murder and sets the backdrop for Kicking The Sky by Anthony De Sa.

In the aftermath of the brutal rape and murder of Emanuel, a fictitious trio of 12-year-old boys decipher their way through the rumours and ruins of a new adult world turned upside down by a wakeup call to their city's harsh reality. Despite the dangers and warnings from parents, Antonio is determined to be seen as an adult. He ventures into the city along with his friends Manny and Ricky. The three boys embark on an adventure that tests their loyalty to each other and their community.

Kicking The Sky is a vividly intense coming-of-age story for the trio of boys and the city at large. De Sa crafts a tale that transports the reader back to a pivotal moment when "Toronto The Good" suddenly found itself covered by a blanket of disquiet. The brutal crime served as a cautionary tale for the community and a catalyst for the city's clean up of Yonge Street's seedy sex scene. Kicking The Sky is a brilliantly insightful and evocative tale of tragedy, truth, and triumph.

View the Kicking The Sky book trailer by Eric Novak of Modern Media Perspectives to see more about this stunning story!

Anthony De Sa grew up in Toronto's Portuguese community. His short fiction has been published in several North American literary magazines. His first novel Barnacle Love was a finalist for the 2008 Scotiabank Giller Prize and the 2009 Toronto Book Award. Anthony graduated from University of Toronto and did his post-graduate work at Queen’s University. He attended The Humber School for Writers and Ryerson University. He teaches creative writing and is currently a teacher-librarian at Michael Power/St. Joseph High School. Anthony lives in Toronto with his wife and three sons.

You can read more about Anthony and his novels by visiting his website anthonydesa.com. You can become a fan of Anthony De Sa and find Kicking The Sky on GoodReads. You can connect with Anthony on Twitter by following his handle @antiole.

Bookalicious is giving away 5 copies of  Anthony De Sa's novel Kicking The Sky courtesy of Random House of Canada! To enter, all you have to do is leave a comment in the "Click Here To Spill It" bubble below. You have until September 27th, 2013 to enter. You must be a YMC member, and please be sure you've registered your email address in our commenting system so we can contact you if you win.

Yummy Rules and Regs: You must be a YummyMummyClub.ca member to win. Click here to sign up. It's free and filled with perks. One comment per member. Entries accepted until September 27th, 2013. Contest open to Canadian residents (excluding Quebec). Winners will be picked using www.random.org. See full contest rules.

Check out the bonus KICKING THE SKY giveaway on the Facebook Bookalicious Page for more ways to win!

To read about more great books visit RandomHouseCanada.ca, RetreatByRandomHouse.ca, and CraveByRandomHouse.ca. Social media fans can follow the bookish tweets with @RandomHouseCA on Twitter and find bookworm fun with Random House of Canada on Facebook.

For more details on upcoming Bookalicious news, reviews, and interviews sign up for the Bookalicious Newsletter!

This is proudly sponsored by our friends at Random House.
www.randomhouse.ca