MAD ABOUT THE BOY By Helen Fielding 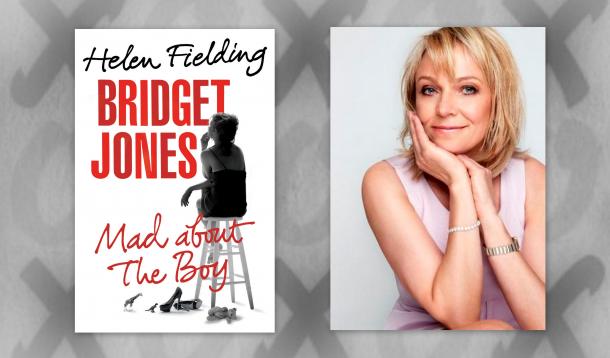 Remember when I helped reveal the title for the new Bridget Jones novel?! Well, another amazing and super fantabulous thing happened in Bridgetland and it all unfolded with the help of social media! Bridget Jones Facebook fans released the book jacket for Bridget Jones: Mad about The Boy by Helen Fielding! Read the press release below for more on this exciting info! Warning: this post may contain a few too many exclamation marks!

Over 117,000 Bridget Jones fans from all over the world took part in an exclusive book jacket reveal on the official Bridget Jones Book Facebook Page! Each page like helped to empty a bottle of Bridget's favourite tipple. Once the wine was completely "consumed", the book cover was revealed!

About Bridget Jones: Mad About The Boy by Helen Fielding

When Helen Fielding first wrote Bridget Jones' Diary, charting the life of a 30-something singleton in London in the 1990s, she introduced readers to one of the most beloved characters in modern literature. The book was published in 40 countries, sold more than 15 million copies worldwide, and spawned a best-selling sequel, Bridget Jones: The Edge of Reason. The two books were turned into major blockbuster films starring Renée Zellweger, Hugh Grant and Colin Firth.

With her hotly anticipated third instalment, Bridget Jones: Mad About the Boy, Fielding introduces us to a whole new enticing phase of Bridget's life set in contemporary London, including the challenges of maintaining sex appeal as the years roll by and the nightmare of drunken texting, the skinny jean, the disastrous email cc, total lack of twitter followers, and TVs that need 90 buttons and three remotes to simply turn on.

An uproariously funny novel of modern life, Bridget Jones: Mad About the Boy is a triumphant return of our favourite Everywoman.

You can join all the Facebook fun by liking BridgetJonesBook, and follow the #BridgetJones updates from @RandomHouseCA.

Check out this handy dandy link for further details or to pre-order the book to be published in hardcover on October 15th, by Knopf Canada, a division of Random House of Canada.

I'm an avid Bridget Jones book and movie fan so all this build up is driving me bloody crazy with all the waiting, and waiting for the book release date! Note to self: save the date October 15th, and be prepared to set up a chair outside Chapters Indigo the evening before! So, are ya with me? You know ya wanna! ;-)

I will leave you with a bit of Bridget witticizm to mull over while you wait for book number three:

“The whole bloody world's got a commitment problem. It's the three-minute culture. It's a global attention-span deficit.”

Press release published with permission from Random House of Canada.