What you see is not what you get

by: The Toy Box 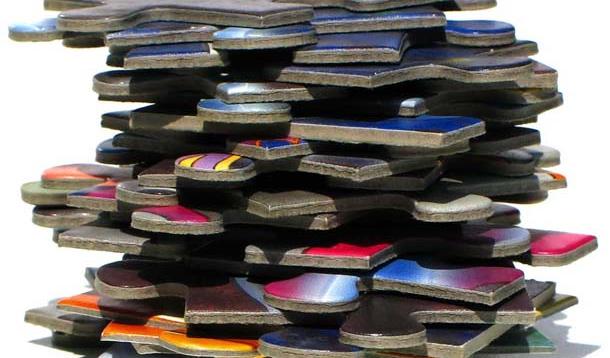 I am not a jigsaw puzzle person. Whenever someone suggests doing one, I usually start thinking of better things I could be doing: re-organize the basement, iron my underwear, perhaps watch some paint dry? But then January and February roll around, the store is generally quiet, and the customers coming in are asking about games and puzzles, and I start to wonder if I'm being closed-minded, maybe missing out on some fun. After a couple weeks of this, it suddenly clicks—I could do another Wasgij puzzle!

If you're not familiar with the Wasgij line of jigsaws, you're definitely missing out on some fun. The images on the boxes are all distinctively cool - chaotically fun cartoons. And then you start reading the box and make the key discovery—the picture on the box is NOT the picture on the puzzle! What's up with this? The box is only a clue to what the puzzle is going to look like!

In the original series, the Wasgij puzzle image is actually a reverse perspective, showing you what the characters on the box would be able to see, looking out. Hence the origin of the name 'Wasgij', which is Jigsaw backwards. The box gives you an idea of a couple shapes you'll be looking for, and some colours, and generally there's something causing an 'Oh shoot!' kind of moment, but you have to assemble the puzzle to know what it actually is!

I'm generally about a quarter of the way through a Wasgij when my little spark of 'maybe I should do another puzzle' starts to fade away, and I'm thinking of all the better things I could be doing, but it's too late—I've put together a small portion of the image, and I NEED TO KNOW what it's going to look like!

If you are a jigsaw person, and you haven't tried a Wasgij, give one a whirl. The sense of discovery you get when you finally figure out what the image is adds a whole new reward to completing a puzzle. Wasgij puzzles sell for approximately $27.95 and are available at many of your local neighbourhood toy stores.


Paul Christy is the owner of The Monkey's Uncle in Invermere, BC., a member of Neighbourhood Toy Stores of Canada (NETS).  He believes the best thing about working in a toy store is watching children's faces light up when they discover an unexpected treasure.

The Toy Box Kids and Valentines

The Toy Box Toys that Engage Kids are Played with Forever

The Toy Box Kids and Valentines