Run for Cover—Elmo Is In The House

INSUFFERABLE, SCRUFFY, AND WHAT'S WITH THAT HORRIBLE HIGH-PITCHED GIGGLE? SIGH . . . THE ELMO YEARS HAVE ARRIVED 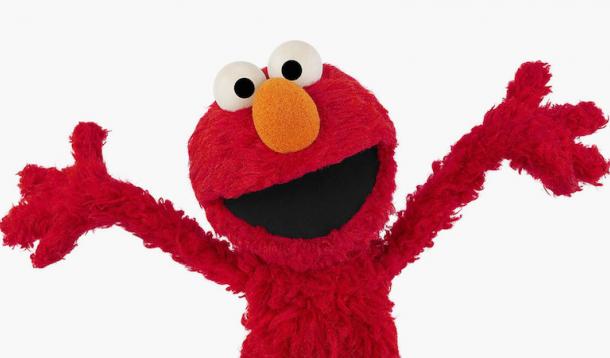 A least it’s not Barney.

Not Barney as in Barney Rubble and Fred Flintstone—that would actually be kind of cool—but the big, purple dinosaur Barney of the "I love you, you love me" variety. That Barney would be a different story. Then things would get serious.

My son is a little over two years old, and suddenly a light bulb has shot on and revealed to him an entirely new glowing universe.

In this imaginative universe lives the entire Toy Story gang—Buzz Lightyear, Woody, and Bullseye, among them—as well as Cookie Monster and yesterday he pointed to his car-print pajamas and clearly stated, "Lightning McQueen."

“Lightning McQueen!” he said, quite proud of himself.

“Where are you learning this stuff?” I inquired, and he reminded me of our visit to his friend’s house a few weeks back and the Lightning McQueen car that was in his buddy’s toy stash, leaving me to wonder about the many things the kid is soaking up that apparently shoot right over my head, like Lightning McQueen, the zippy red star of the Disney/Pixar animated movie, Cars.

And so it begins.

Suddenly, my son is hooked on a bunch of insanely popular TV and movie characters, and he is name dropping!

My husband introduced him to Toy Story, but the rest he is picking up on his own from friends, books, clothing, and toys he sees.

Though I shudder to admit it, Elmo has made the cut, too. The red, scraggly muppet has finally worked his charm—loved by children and completely loathed by adults—on our impressionable toddler.

I had believed he’d skip right past the ever-present Elmo craze! That once he heard the furry red monster's ridiculously high-pitched voice and grating giggle, he’d see beyond his cute, scruffy coat and funny googly eyes and come to the same conclusion as I did—Elmo is annoying.

At first he was on board with my thinking.

When my son was about a year old, my dad gave him a talking Elmo. Every time Elmo was near, my son would cry while I silently cheered, smugly turned off the toy, and rushed to comfort my petrified baby.

Then, somewhere between then and now (which takes us up about a year), Elmo has become a bit of a rock star.

There is no way around it—he digs him. And once he’s hooked on something, there’s no going back.

The unfortunate part about this really is the enthusiastic chimes of "Again! Again! Again!" coming from him.

Repetition and toddlers go together like Bert and Ernie, Batman and Robin, a horse and carriage, Thelma and Louise . . . well, you get the drift.

Thankfully, my son is mostly obsessed with Toy Story so far. The movies are funny enough that I don’t yet want to stab my eye sockets out with an electric drill.

“To infinity and beyond!” he calls out as he pretends to fly around the house.

“I am a space ranger!” he declares.

Much like the spread of the flu, and unavoidability of snotty-nosed kids, and the rampant passing about of creepy crawly head lice, Elmo is everywhere, and unless we become Mennonites in the next week or so, he is probably sticking around for a while.

But, sometimes as a parent you just have to suck it up and take one for the team.

Okay, fine, sigh, like Elmo if you want. It could always be worse.

And there it is, the silver lining—at least it’s not Barney.

Want to read more by Tanya Enberg? Try these: Toddlers Can Be Crazy, Contradictory, Irrational Beasts; Is It Ever Okay To Discipline Someone Else's Child? and Is TV the Enemy?