7 Tips To Help You Stay Sane When Camping With Kids

IT CAN BE DONE. KIND OF. 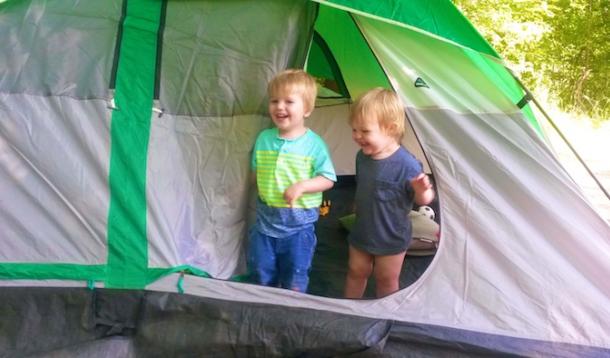 “That sounds like hell.” Though he denies it now, I swear that was my husband’s response to the idea of taking our two-year-old camping.

And it is a logical reaction. After all, campfires and clumsy toddlers don’t exactly mix, do they?

Yet, I have wanted to take my son camping since I first locked eyes with him. I want him to know the fun of getting outdoor grit on his skin and dirt under his nails. I want him to experience the thrill of waking up to the sound of birds singing with only a thin sheath of nylon separating him from the dewy morning air and earth.

I made a plan with a friend and her son to go to Sandbanks Provincial Park—located in Prince Edward County, Ontario—which is famous for its rolling sand dunes and spectacular beachfront.

My husband (probably jealous of all of the fun he knew we were going to have) decided to ride his motorcycle up and spend a night.

But, he was kind of right in his initial assessment—camping with toddlers is hell. And it is also spectacular.

The instant my friend and I set the first tent up, our boys began running around the spacious dome chasing one another and giggling ecstatically. Instantly the painstaking work of preparing for the trip became worth it.

They only had a handful of toys—a couple of trucks and shovels—but they had enough sticks and rocks to keep them occupied for hours. They surfed their small bodies down the snaking sand dunes made of soft, golden grains and clamoured back up the slippery slopes for more.

They were high on life, giddy on the great outdoors, and happier than happy.

I realize that my Pollyanna retelling of this adventure sounds pretty darn good so far, but even through my nifty, rose-coloured glasses, I can admit there were some very hellish, high-stress times.

Here is what I learned from camping with a toddler:

Our campground was more than a two-and-half hour drive from Toronto and, with kids in car, the journey was definitely a test in resilience. If you can find a great site close to your home, do so. That way if your excursion is a major bust, it will be easier to pull the plug and return to the comfort of your beds.

My husband and I have a vomit monster. He doesn’t like going in the car because he almost always gets sick. This time, I was prepared and bought Sea-Bands (natural, drug-free wrist bands that help fend off motion sickness). Think about your child’s must-haves for a successful trip. Is it a favourite blanket, stuffed animal, or, like us, a way to achieve a sick-free journey? Whatever it is, bring it.

Warning: your little one might refuse naps and be raring to go all day long. This will suck—big time. Some kids may be wary of sleeping in a new environment, unsettled by a change in their routine, or even afraid of the noises coming from the nature surrounding them. Unfortunately, you won’t know how your child is going to respond until you get there, so hope for the best and expect the worst.

4. KNOW HOW YOUR GEAR WORKS:

Case in point: I packed my single-pan induction cooker, but when I plugged it in, it didn’t heat up. I flicked the switch on and off, turned the temperature up and down, and checked the plug before finally giving up. I carried the cooker back to the car and only then noticed that the instructions were on the outside of the box. The cooker does not heat up until the pot is on the element, it said. How could I forget that? And yet I did.

It is smart to give your gear a trial run beforehand (especially so when travelling with kids) so you can check for damage and missing parts, as well as resolve any technical issues you might encounter before you leave.

5. CONSIDER THE ADULT TO CHILD RATIO:

Had my husband not driven up for a night, I don’t know how we would have managed to pack up to leave on our last day. Have you ever tried to tear down tents, wash dishes, and load up a car while keeping track of busy toddlers? Next time: Four adults to two toddlers, minimum.

The prep time for the trip took longer than the actual camping. While I wouldn’t commit to an entire week, three or four days I think is a good amount of time for beginner campers.

7. ROLL WITH THE PUNCHES:

Admittedly, I failed at this.

Nothing about camping is easy. Add a kid to the mix and, wow. There's the driving and setting up, the cooking, the cleaning and . . . why the heck did I want to do this again? Oh, yes. It’s for the children. I forgot.

Next time, I will make a point of taking deep breaths constantly and laughing (even when I am too busy pulling my hair out).

If you liked this, you might also like: "10 Signs Motherhood Has Made You Lose Your Mojo" and "Are Car Rides With Your Toddler Unbearable?"