When Something Doesn't Seem Right, Should You Speak Up? 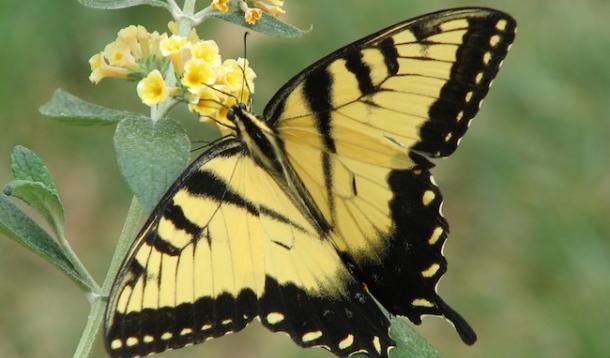 One recent night, I had trouble sleeping. A butterfly was keeping me awake. It was flapping its long, elegant wings against the sides of a small glass jar that had tiny punctured holes in the lid.

For two days, the large Swallowtail had been fluttering about the playground at my son’s daycare until somebody thought to capture it in order to give the toddlers a closer look.

The butterfly was stunning with beautiful yellow and black velvety wings, though I suspect more stunning amid breezy trees and fragrant flowers.

I inquired about the butterfly and was assured it would be freed in the morning. It was a curious thing, for what could be gained by keeping a butterfly trapped and isolated inside of an empty building over night?

Before leaving, I considered sneaking the jar out and freeing the beautiful creature, yet I did nothing.

We left. We went home. We ate.

Later that evening the butterfly haunted me. I imagined the eerie silence of the hallway broken by the sound of the butterfly slamming its wings against the glass in a futile effort to escape.

I imagined its fear. And I wondered why I had left it alone, why I hadn’t intervened.

Surely, risking a pinch of trouble had I been caught red-handed with the jar would’ve been a small price to pay for its release from captivity.

As I tried to sleep, I worried the butterfly might not survive until morning and, if it didn’t, would I have been guilty for playing a role in its death?

Isn’t the conscious act of not doing something—of not standing up, of not stepping in—just as bad?

You might be reading this thinking, "please, it is only an insect, for goodness sake," and you’re right. If it were a cockroach, I wouldn’t be half as generous, yet I was burdened by guilt.

The way in which we humans attach value to other creatures sharing the earth with us is a strange thing. We love dogs, but not rats. We keep cats, but not mice. We love butterflies, but not moths.

Last winter in Cayo Coco, Cuba, I approached a man who had been collecting starfish from the water to keep as souvenirs and politely told him they were alive.

I showed him the healthy pink bottom of the living, breathing echinoderm, but he still seemed unconvinced that they were anything other than tourist collectibles, which inevitably end up rotting in hotel rooms until the stench becomes so unbearable the remains get chucked.

“If they are alive, I’ll put them back,” the man snapped defensively. And maybe he did. They at least stood a better chance than they had moments ago.

As for the butterfly, eventually I set aside my worry and fell asleep.

The next morning, I was anxious to get to the daycare to check on it.

It was alive, but zapped of energy. There was no food for it to eat.

Finally, I spoke up.

“If you don’t release the butterfly, it will be dead soon,” I said, which probably isn’t the thing to say when there are a dozen or so big-eyed toddlers standing nearby, but it is the reality.

If we hope to teach children about other living things, we must also teach them the importance—and fragility—of those lives.

Thankfully, I was told that they were letting the butterfly go later that morning.

I considered staying long enough to see it fly from the jar, to witness its glorious wings soaring, fully expanded.

But, instead, I turned and left.

I felt great sadness as the butterfly, now sitting still in the bottom of the jar, receded from sight.

Again, I fought my instincts. I fought my nature. It was an unnatural thing not to grab the jar and run to freedom.

If you liked this, you might also like: "Is Becoming A Mom In Your 20s Better Than Waiting?" and "Training Day: The Importance Of Teaching Dogs The Rules."