Kids and Television: Is TV The Enemy?

CAVING ON SCREEN TIME BEFORE THE AGE OF TWO . . . GASP! 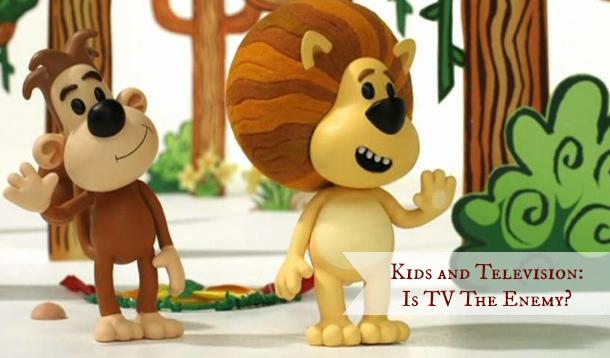 For more than a year and a half, we’ve shielded our son from the giant flat screen TV sitting in our living room, taking up far too much space.

Then, one day, I heard British accents spilling from our living room into our kitchen where I was preparing dinner.

I soon learned that those voices belonged to Thomas the Tank Engine and Friends, which my husband found on YouTube, and this became the first show our son ever watched.

Why This Family Implemented A No Technology Or Television Rule

Perhaps it is because we live in the land before time—aka the pre-cable Dark Ages—that I’d never heard of the show; however, I now know the chirpy theme music by heart and all about the endless squabbles that go on between the trains, nattering away like old married couples.

As you can imagine, our child watched with his mouth agape, transfixed on the moving images before him. He barely blinked and only paused to call out the occasional enthusiastic "choo choo!" while pointing his tiny finger at the screen. He was delighted, giddy, and very impressed by this new discovery.

Since then, he has seen the BBC’s adorable Raa Raa the Noisy Lion, the cute animated British shorts, entitled Small Potatoes, as well as one part of a Baby Einstein video.

He triumphantly calls out the letters of the alphabet, proudly names colours, and roars with the lions, tigers, and bears. We talk about what we’re seeing, and teach him new words as they arise. He giggles when he finds something funny, and busts out his dance moves when music begins playing.

At first, I felt sick about our sweet innocent child being subjected to the brain rot that would surely come from television.

After all, we’ve all been warned about the effects of TV on impressionable growing minds, and most of us are aware that the American Academy of Pediatrics advises no television before the age of two.

That advice, however, doesn’t often fly.

According to a survey cited by HealthyChildren.org, 40 per cent of infants have watched some sort of video by five months of age, and by the age of two that number jumps to 90 per cent.

So why is TV so bad?

According to the website, “It takes two full years for a baby’s brain to develop to the point where the symbols on a screen come to represent their equivalents in the real world.”

Meanwhile, other concerns include delayed language and reading ability, insufficient learning through interaction and play, as well as the development of poor short-term memory.

Basically, it is considered junk food for the brain.

Yet, with the exception of one or two friends, most of the parents I know have introduced their children to some form of screen time, allowing mom or dad a few minutes to scoot to the bathroom, make a quick phone call, or prepare a meal.

Time Magazine ran an informative article in 2009 asking, TV for Babies: Does it Help or Hurt? exploring all sides of the issue. It is well worth a read.

So, why have we caved?

Well, in truth, he only catches a few minutes here or there. It is a rather small and insignificant snippet in a day otherwise filled with activities, laughter and fun, and more hugs, cuddles, and kisses than I could ever keep track of.

As quickly as his enthusiasm ignites when he see his potato pals, his attention dissipates and we return to kicking a ball around, playing chase, building towers, working on Play-Doh creations, colouring, and snuggling up together to read books.

He is an active boy, and we are actively involved with him. As is the case with anything along the parenting journey, it’s about knowing your child, understanding limitations, and observing what they are ready to handle.

I don’t believe excessive television is beneficial for anybody (adults and children alike), or that it should trump the important role of parenting or be used as a babysitting tool.

Most things—even good and healthy things—are best in small doses.

With that in mind, I am often surprised by how educational some of the available offerings are, to the point where I no longer vehemently object to the occasional Raa Raa of a lion or choo-choo of a train. Our son also recently tried cake for the first time, so maybe we're on a roll. Yep, we're rebels.

How about you? What are your feelings when it comes to television and children?

Want to read more about the trials and tribulations of motherhood? You might enjoy these posts: Six Things that Surprised Me Most About Motherhood and Motherhood Changes the Core of Who You Are.

Tanya Enberg: Unexpected Mother How to Eat, Drink, and Be Spill-free