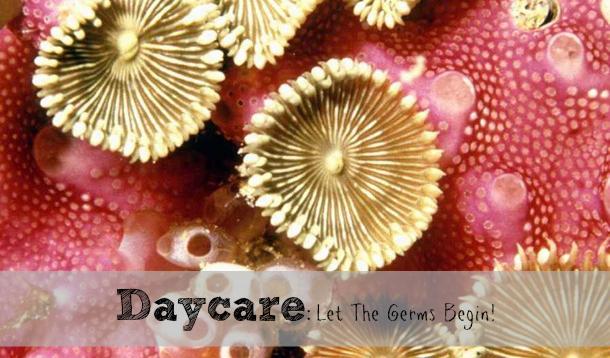 Less than a week-and-a-half after starting daycare, our boy was given the boot.

No, he didn’t spark a toddler riot or get busted creating anarchist crayon drawings, but he did do one thing that our daycare does not tolerate—he got sick.

Yep, it didn’t take long before our son succumbed to the daily onslaught of drippy noses and wet, uncovered coughs among his new crew.

Before daycare, I thought our kid’s immune system was as tough as nails.

Case in point, in a one-week span, he was unknowingly exposed to hand, foot and mouth disease by one of his little friends, another pal’s Pharyngitis, and then my husband’s flu, and didn’t get any of it.

Those chubby-cheeked little munchkins pack a punch, man, what with their sharing of slobbery toys and lack of appreciation for personal space. There is a buffet of new creepy crawlies coming at him from every side, and a person can only take so much, really.

So, just as I was getting into the swing of things and enjoying hours of uninterrupted writing time, I was called up and asked to come and fetch our son, who had suddenly become ill and had a low-grade fever.

When I arrived at the daycare, he was lethargic and his eyes were droopy, like those of a turtle.

When I picked him up, he fell heavily into my arms, a sack of sweet baby boy with dangling feet, and he quietly muttered "bye, bye" to his new friends. His voice was soft and slurred.

Here we go, I thought. This is what we’d been warned about—the cesspool of germs synonymous with daycares.

Says one friend, a father of two young children, “The socializing for your child is awesome. But, be prepared to get sick a lot. The kids get together, lick things, swap germs, wipe their hands on each other. And it builds up their immune systems. Your son will come home with a bit of a sniffle, but those microbes get to the parents and knock you both on your butts. You're unprepared for the kind of germ warfare that will be brought home on a daily basis.

The next morning, your son wakes up, he's fine, he's chipper, that sniffle has gone away. You only want to die. Your eyes are swollen shut. Your nose is clogged. Your ears are plugged. You wonder how the plague could have overtaken you so quickly.”

My friend was right.

After another full day of being quite sick and clingy, our child was suddenly better.

The next morning, he was buzzing around the kitchen, babbling away, and dancing about.

My husband, however, was not.

He let out a wet cough and said a cloggy-nosed goodbye before leaving for work.

As for me, I was feeling fine.

In the past few years, I’ve been sick only once, and that was because our son coated me in projectile vomit (I tell you, there really is no coming back from that).

Oh, but then it hit—the watery eyes and stuffed-up nose, the sore throat, body aches, and ears so plugged I can barely hear.

Right now, I am snuggled in bed with a big box of tissues at my side and a mountain of deadlines to meet.

Meanwhile, my husband is at work being propped up by cold and sinus meds.

As for our son, well, you probably already guessed—he has happily returned to daycare with barely a sniffle remaining.

Welcome to the world of daycare. Looks like we're in for a treat.

If you liked this, check out: "Freedom! What is this Thing Called 'Me Time' Again?" and "Sending Our Child Out Into the Big World of Daycare."

Tanya Enberg: Unexpected Mother Is It Ever Okay To Discipline Someone Else's Child?