Motherhood Changes the Core of Who You Are

WHETHER YOU'RE A CELEBRITY OR LIVE HERE ON EARTH, YOU'LL NEVER BE THE SAME AGAIN In the December issue of Marie Claire magazine, actress Julia Roberts talks about how she wound up working with Meryl Streep in the upcoming film, August: Osage County.

But it isn’t her commentary about Streep that stood out, but a snippet within the terrain of a larger piece.

“We have the same agent, Kevin Huvane, and it was his dream,” Roberts says of the powerhouse pairing of her and Streep.

“As my career is slowing down, he thought, 'I’ve got to figure this out before she brings it all to a screeching halt in favour of car pools.'” 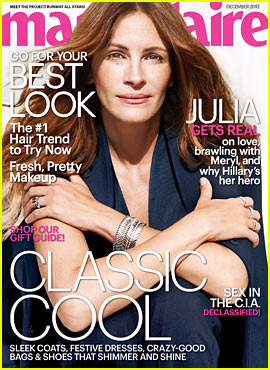 Roberts, 46, has three children with her cinematographer husband Danny Moder. There are the nine-year-old twins Hazel and Phinnaeus and six-year-old Henry.

The article goes on to interview some of Roberts’ costars. Several of them lament on the fact that the Oscar-winning actress doesn’t work as often as she once did. This is by choice, of course.

She doesn’t want to miss time with her children. It is a luxury, to be sure, to be rich and famous and have the choice of whether to work or not, but money aside, her psyche is relatable.

It is the battle between work and home, the exacting balance we all strive to achieve, regardless of its great futility.

With motherhood comes a shift. It’s more like a tidal wave than a ripple. It is huge.

The entire being of the person you were prior to becoming a mother is turned upside down and cartwheeled around, and then shaken, stirred, and sloshed about like a martini.

Then, you might look back at the career you left behind for a brief maternity-leave stint—that very same job you swore you’d want to return to as you stared down at your impossibly big belly—and suddenly it doesn’t look so dazzling.

The veneer has been scratched off.

Here you’ve met this sweet little darling—your child—and this fascinating creature has wormed his or her way so deep inside your heart that the very fibers of your being have been altered and entirely re-stitched.

You are a cosy new sweater, smitten and filled with hugs and kisses. This love has turned you positively mushy.

Then you glance into the near future and see your old job staring at you, trying to wave you back.

Many moms, regardless of their financial state, experience the pulling divide between these two places—the grueling work and emotional investment of motherhood and the job nipping at their heels.

I recently made a tough decision to turn down a position that would’ve been incredible for my career but awfully hard on my family.

The work meant I’d rarely see my brood on the weekends, and even though our beloved snuggly Saturday mornings with pancakes and music might continue, they would have had to go on without me. And while there would still be weekend outings, I would no longer be part of them.

At night, I wouldn’t be home to say goodnight to my son, to enjoy the wind-down ritual of us sitting all together on the couch with a big stack of books, our child melting into my husband’s lap as though he were a comfy chaise lounge as he gets sleepier by the second.

There was a time I would have jumped at the career opportunity that came my way.

I’ve worked many weekends throughout many years, but it isn’t the same now. I am not the same.

Motherhood shakes, awakens, and enlivens the core of who you are.

It isn’t a conscious decision, this reworking of priorities. The change is organic. You can’t undo it, nor can it be molded and reformed like Play-Doh.

I watch the morning light strike my son’s face as he zooms his red truck along the frame of our bay window. He is making cute vroom, vroom noises.

I notice that the dimples on his cheeks deepen as his mouth takes the form of a giant, delicious grin, and that his eyes twinkle like something so magical, I cannot place it. I hear his infectious, belly-deep laugh and think to myself, 'I’ve never felt this way before.'

This is happiness. I was certain we’d met many times before—happiness and I—but it was never like this.

Now it is soaring through me.

I cannot take my eyes off of the beautiful, happy creature calling me mamma. It’s as though every single moment contains a treasure, something that shouldn’t be missed. The sentiment of life being too short suddenly feels too true.

Like many moms, I love my career, but I also need that to work with my family.

Lost time can’t be found again. We can’t hit the back button or hit replay. The time of childhood is fleeting. I fear I’ll blink, and it’ll be gone.

It doesn’t matter who you once were, or whom you thought you might one day be, whether you’re a glamorous Hollywood starlet or live here on earth with the rest of us, you are now somebody’s mother. The power of it is universal.

It redefines everything; every single decision you make now carries the weight of this delirious love with it, your most important role to date.

Tanya Enberg: Unexpected Mother Let's Bring Out the Best in Ourselves