AND THE FAMOUS WRITER LEFT ME TONGUE TIED 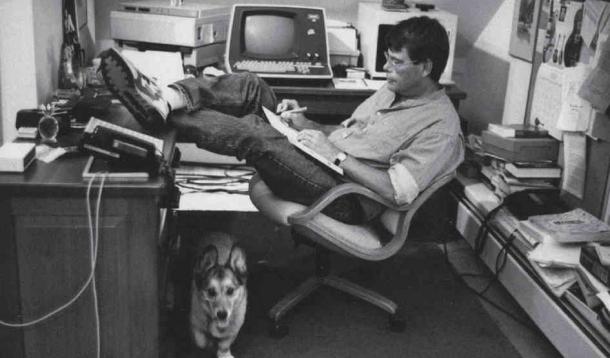 It will forever be known as the day I met world-famous writer Stephen King at the Royal Ontario Museum.

I first heard of Stephen King when I accidentally stumbled upon the film version of Carrie playing on TV as a child.

When my parents found me frozen in front of the boob tube watching the bloody terror unfolding before my eyes, I was in pretty big trouble. I instantly knew that I’d discovered something really great; my parents’ reaction was a dead giveaway.

My admiration for the author travels beyond his massive library of fictional works, among them Misery, The Shining, Cujo, The Shawshank Redemption, and The Body (which was adapted into the film, Stand By Me), and over to my nightstand where Stephen King’s On Writing: A Memoir of the Craft sits at this very moment.

See, I’d recently finished reading it for the fourth or fifth time on the fateful day our paths crossed. I say fateful because for me it was, although I am quite sure that in the world-famous scope of Mr. King’s existence, our run-in was a non-event for him.

My husband, baby, and I were just leaving the ROM lunchroom when a very tall, slender man with slightly hunched shoulders—a man who happened to look an awful lot like Stephen King—held the door for us while his companions wandered on ahead.

It is at this point in the story that you'll begin to understand just how cool I am.

I saw the man and stopped dead in my tracks. "You look exactly like Stephen King,” I said to the fellow patiently holding the door.

“Yeah, I get that a lot,” the man responded as I stared unblinkingly at him. Yes, that's right, I just stared and stared, mesmerized by a man I believed to be Stephen King.

His voice was also recognizable—affable, smooth, comforting like a glass of warm brandy.

My heart began racing and I could feel words jumbling up in my mouth. If I were to speak just then, I am certain my voice would’ve sounded as though my tongue had become tangled in cotton balls.

So instead, I stood there with my jaw agape while I studied the man’s features. Maybe he thought I was a crazed fan, a la Misery’s demented character Annie Wilkes (played eerily well by actress Kathy Bates), or perhaps Stephen King was just hungry and wanted to be on his way, but whatever it was, he decided to extend his hand to me.

“Nice to meet you,” he said taking my hand in his and affirming what I already knew—that the prolific writer was in our midst.

“Oh … my … God,” I sputtered. I was a deer in headlights (well if a deer caught in headlights happened to be sporting a big goofy grin, that is).

Thankfully my outside voice remained in silent awe. Cool, right? RIGHT? Mr. King (who was in Toronto to open the International Festival of Authors) literally took the words out of my mouth. I was spellbound.

Finally I released the man's hand, allowing him to reunite with his wife and daughter in the lunch line, which is exactly where I tracked him down a few minutes later. Honestly, it wasn’t as Annie Wilkes as it sounds.

This time, I had located my words and was able to tell him just how much his memoir meant to me. I admitted that I returned to it often.

“Well I did,” I said, which is akin to admitting you may just be one of the biggest nerds on the planet.

He was gracious. He thanked me. But what I had really hoped to do was thank him.

What I meant to say was that if it were not for him, I might not be sitting in my cozy writer’s room today with the curtains drawn and door shut behind me. It is here that I come to write every single day, a ritual that is at once simplistic and complex, and wholly inspired by the words and wisdom of Mr. Stephen King. Yes, the one and only Stephen King. By the way, did I happen to mention that I met him once?