When Baby Discovers Play, a Whole New World is Born When our son was born I knew very little about babies, other than the fact that they were squishy creatures with rather large heads. After bringing him home from the hospital, I was shell-shocked from the reality that, after months of seeing him as a hazy blob on ultrasound images, here he was in the flesh. I had no clue what he might like to do, but surely just lying around nursing was bound to get boring, no?

Armed with toys, I went about parading rattles, black-and-white images, and stuffed animals before him. Instead of happily responding to these efforts, he stared ahead glassy-eyed and unimpressed.

What I learned about our newborn was yes, he really did just want to lie there and nurse. Go figure.

This happened right about the time his gummy grin finally took form at about the five-week mark. He’s now 10 months old and loves to play, smile and laugh. What this means is that you’ll often find me making silly noises, jumping into impromptu dance sessions, and singing my heart.

The daily goals are beautiful and simple — to make our boy happy and see his dimple-cheeked grin as much as possible.

Thankfully, I now get a little help from his toy collection.

One item that he plays with daily is one of the Fisher-Price Favourites, the Fisher-Price Rock-A-Stack. This colourful classic has come full circle, as I too had a set of my own as a baby. This is his go-to toy when he’s in his highchair waiting for a meal and now that he’s a crawling machine, he tosses them and scoots around the kitchen gathering them up. It just goes to show that some toys just stand the test of time. That said, modern offerings have also come along way, baby. 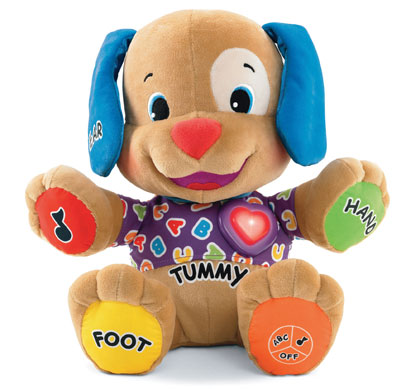 Recently our baby met a far more technically advanced toy — the Fisher-Price Laugh & Learn Love to Play Puppy. When he first heard songs coming from this cuddly puppy (Itsy Bitsy Spider, Head, Shoulders, Knees and Toes, and If You’re Happy and You Know It) he began laughing and moving his arms delightedly. This find meets different stages of his learning needs and social needs through play.

Words are written to indicate tummy, foot, hand, and heart and then cheerily said aloud when squeezed to help make connections between words and images. Fun and interactive, the floppy-eared puppy identifies colours, sings the alphabet, and encourages games, such as Peek-a-Boo. 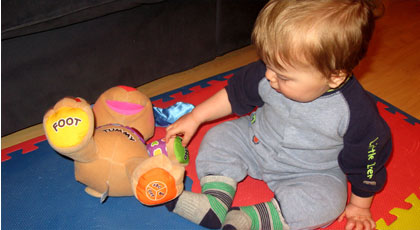 Almost daily, I have the joy of witnessing him make links between cause and effect. These discoveries are fascinating for both of us. I observe the precise moment when he realizes an action can create reaction, and thrillingly, so does he. Seeing his bright blue eyes fill with wonder, imagination and inquisitiveness is so heart-meltingly pure, I want to bottle it.

Since grasping the whole ‘play’ thing, it sometimes seems as though that’s the only thing he wants to do.

Tiring? Absolutely. But it’s also magical. And it means more dimply smiles for us, so it’s win-win all around.