The Secret Is Out And It All Started At Pizza Hut 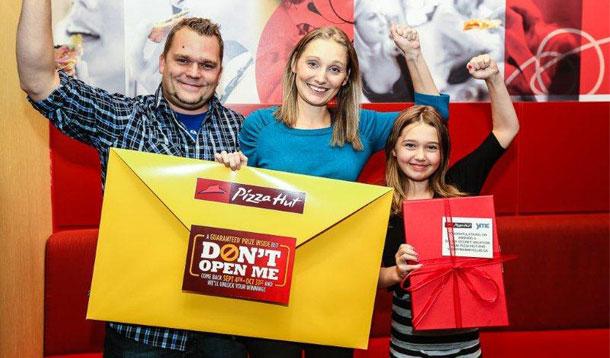 On my blog, The Life of a Prize Queen, I told you that I was waiting to hear back from our extremely lucky winner of the Secret $10,000 Disney Cruise and Pizza Hut Party Contest. Well, after my second email to our winner, I finally heard from Hayley Malloy of Oshawa, Ontario.

Just as I predicted, lots of thank yous and exclamation marks!!!

Here is Hayley's story of what happened after she won:

It all started at a Pizza Hut restaurant. Hayley, her husband Robert, and their eleven-year-old daughter Gemma were greeted by the Pizza Hut team, who presented them with their prize and escorted them to a table overflowing with food. All the while, restaurant patrons were cheering and photographers were shooting. Hayley thought they were just going to pick up the prize, and never expected to be treated like such celebrities. Gemma felt like a movie star! 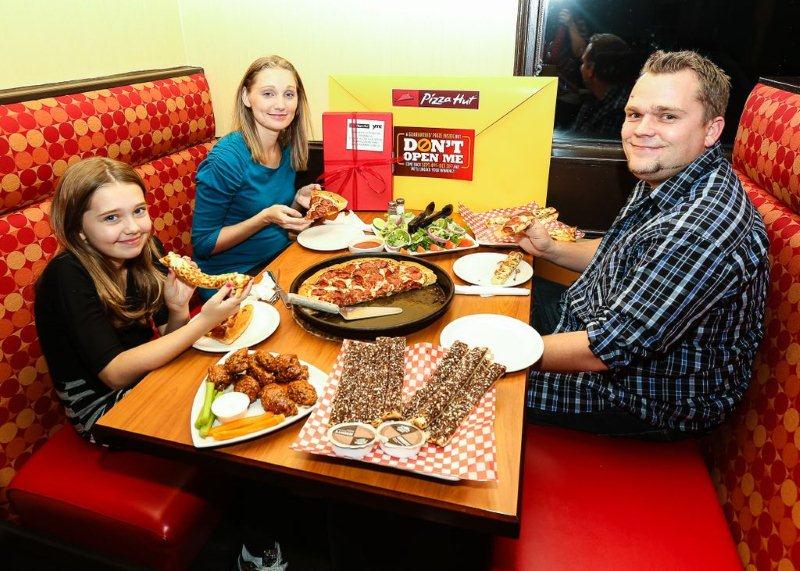 The chocolate Pizza bread is delicious!

Hayley is in her second trimester. A few days prior to their departure, Hayley experienced some complications due to her pregnancy, and bed rest was recommended. Could you imagine? Hayley and her family were devastated, but resigned to the fact that Robert and Gemma would go without her. The good—no GREAT—news was that more tests convinced her doctor to allow Hayley to go on the cruise, as long as she used a wheelchair and stayed off her feet as much as possible. So, with the help of a rented wheelchair and an Air Canada flight to Orlando, off they went to begin the family vacation of a lifetime!

The Disney Cruise: "Our Favourite Vacation...Ever!"

I recently spoke to Hayley about their trip and she was just bubbling over with excitement—she had so much to tell me. Here is what a $10,000 Disney Cruise looks like... Gemma and Minnie at Castaway Key

The Luxurious Details: "We Felt Rich!"

Hayley and her family were booked into a Concierge Suite, which translated to VIP treatment throughout their week-long cruise. They were given a twelfth floor room with a balcony, extra staff to serve their every whim, and access to the Concierge Lounge and a VIP lounge where fancy sandwiches, lattes, and cappuccinos were always available. Speaking of food, Hayley told me that they were served the best food that they had ever eaten! Hayley and Robert also loved the two cell phones that were waiting for them in their room, so that they could always be in touch with their daughter.

For Hayley and her family, what set the Disney Cruise apart from all others was the feeling that they were at Disneyland—not just on a cruise.

"Disney characters dressed in theme costumes were everywhere, there was beautiful Disney art work throughout the ship, and the staff was so enthusiastic! And every night there was a Disney show. I loved seeing Mickey wear a tuxedo for the ship's formal evening and then showing off his beachwear at Disney's private island, Castaway Key!"

The Malloy family got to choose their Ports of Call, so they enjoyed day excursions to Grand Cayman, Costa Mia, and Cozumel, in addition to experiencing Disney at its best while spending the day on Castaway Key.

"On Castaway Key, there was an unlimited barbecue buffet, snorkeling, boat rides, excursions, and swimming with giant turtles!"

If you recall, doctors orders instructed Hayley to stay off her feet—so, yes, she did miss some excursions, but in addition to having an excuse to do a ton of shopping, she also got to do a lot of this: What Hayley and Her Family Will Always Remember: "Just Being Able to Go!"

Hayley shared with me that the best part of their Disney Cruise was seeing their daughter's face filled with excitement and wonder every day, as she experienced the magic of Disney. Hayley and Robert loved being able to combine a Disney vacation and a cruise, as it allowed Hayley and her husband to have some adult vacation time for the first time since they were married!

"Gemma was so excited to spend her days at the Kids Club on board. Robert and I got to spend time together at poolside, going to the coffee lounge, and at pubs in the evenings to listen to live music."

And as a family, they will always remember the Disney Cruise Family Formal, where they got to dress up in their fanciest clothes and enjoy an evening of food, drink, karaoke, and dancing with Disney characters. And Hayley appreciates having the opportunity to wear her favourite Maternity Prom Dress again. That's right! Remember I mentioned that Hayley and Robert had never had a vacation without Gemma? Well, that's because Hayley was pregnant with Gemma at her prom! Congratulations from all of us at YMC on the upcoming birth of your second child.

The Malloy family would like to send a huge, HUGE thank you to Pizza Hut, Disney Cruises, and YMC for a family adventure of a lifetime!

"Now that we've been on a Disney Cruise, we are already hoping to return in a few years once our new baby is old enough, so we can see the wonder in his/her eyes!"