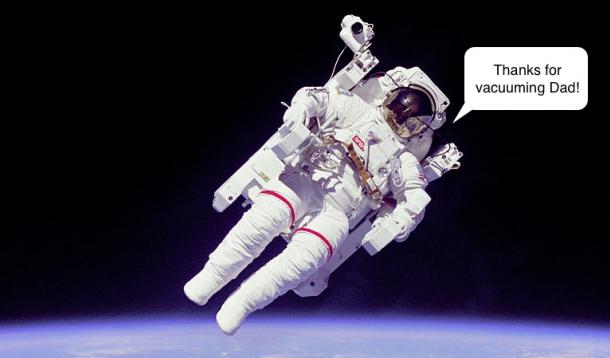 In 25 years, when my eldest daughter holocalls me from the surface of Mars to update me on the status of the terraforming venture she is leading, will I be able to credit my passion for mopping? That’s the gist of a study from the University of British Columbia, which found that dads who do chores are more likely to raise daughters who pursue gender-neutral careers.

Now on the surface, this finding makes sense—seeing dad perform traditional female roles would clearly have an impact on how a child views the world; however, before everyone rushes home to tell their husband to get to work, maybe a little context is in order.

In my house, as I currently work from home, the chores are pretty evenly divided already. I do most of the cooking and a lot of the cleaning, but that is mainly because I’m OCD. The laundry is exclusively my wife’s domain, mainly because I suck at it, but also due to her superhuman abilities with stains of all kinds. The problem, and I’ll stick up for the guys here, is that the division of labour at home is not always a matter of splitting everything 50-50. There are a myriad of factors that go into who does what, including who works and who doesn’t, how long they work, where they work, and personal skills and interests. Is it fair to chide a dad who works 60 hour weeks to put his daughter through university because he doesn’t cook enough? What about a mom who just loves cooking? Should she give it up in the name of gender-neutrality?

The study suggests that even in families where both the mom and dad express support for gender neutrality, the daughter’s future choice of career is still primarily affected by the father’s actions as opposed to merely his words. Again, this seems intuitive, as non-verbal cues often influence us more than words can, but the study has a serious correlation/causation flaw. By definition, a dad who does more household chores is going to be at home more often. Is it the chores or simply the increased presence of dad, and his gender-neutral attitude that makes the difference?

The reason I ask is not to absolve dad from chores, clearly housework—including things like finances, yard work, and repairs—have to be divided fairly for a household to function; however, it is important to understand what is at the core—being there. Your presence as a father in a positive and influential way is what matters. I say this because many dads I know would love to do more chores, pick the kids up at daycare, and take them to soccer practice, but can’t. Many moms would love to do more, as well. As long as both parents are contributing to the family in some way, including working long hours at the office, it’s hard to start judging anyone for a lack of household chores. Conversely, a dad can say he supports gender neutrality all day long, but if he is lounging on the couch while mom washes the dishes after cooking dinner, then chances are his views aren’t held all that strongly.

The other issue I have with the study is the way is seems to disparage certain careers as female-oriented. My wife is a teacher, what might be considered a traditional female role, and she loves it. The suggestion that girls need to be discouraged from certain careers is troublesome. I often joke that I want my daughters to be ballerina-astronauts, because I like the balance it suggests—that you can pursue any path in life and still maintain your identity as a female, whatever that is to you.

The problem with these studies, as is often the case, is the inability to control all the variables. Do these daughters have siblings? Are they older or younger? Brothers or sisters? What is mom’s career? Does she have one? The number of factors that can lead a young person down a particular path are endless. As a dad, I appreciate the fact that I can be at home a lot and contribute to the family, but if an opportunity came along that kept me away from home more often, would I be letting my daughter down by taking it simply because I couldn’t cook dinner four nights a week?

The best division of labour in any household is the one that makes sense for everyone. A marriage isn't about keeping score. I could do the laundry at my house, but it would easily take me double the time and would likely cost my family more due to the number of shirts I would shrink and stains I wouldn’t be able to save. The best thing I can do for my daughters is to treat my wife, and all women in my life, with respect, and provide her with a positive role model. If that means I cook and clean, great. If it means I work a little late and bring home a pizza, that’s ok too, so long as when she needs me most I’m there for her.

If you liked this, you might also like "If The Wolf Of Wall Street Were A She . . . A Gender Reversal," and "5 Important Things I've Learned While Raising A Girl."