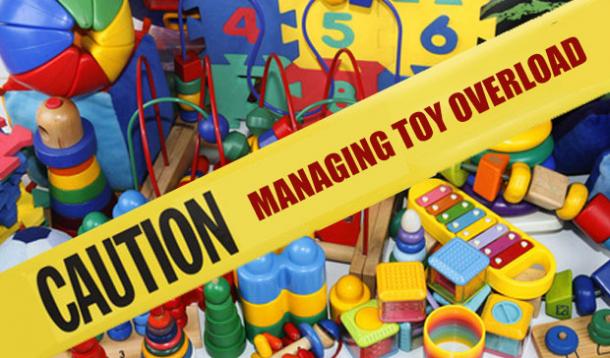 I'm a fun guy, I really am. I play dinosaur with my girls, rampaging around on my hands and knees, risking imminent joint seizure; I've been known to partake in a tea party or two, though the service is often lousy; and I may or may not have developed a comfort level with wearing a tutu. However, no matter how much fun I try to be, I have a serious problem—toy overload.

When my wife and I first found out we were going to become parents, we had a number of great discussions on how we would raise them, what our values were, and the basic guidelines that we would try to stick to as responsible guardians of our children's future. While most of those have turned out OK, some were laughably naive. One in particular has been extra tough—minimizing the amount of toys our children have.

Toys are great, I'm looking forward to the day when my girls are a little bit older so I can start playing with LEGO again, but one of my goals was to never allow my house to look like Toys "R" Us exploded. Mission: Failed. Part of my motivation was altruistic, I didn't want my girls to become too materialistic and expect mountains of plastic gizmos to entertain  them. The other, more selfish part was that despite being a parent, which I love, I didn't want to lose my identity as an adult who had a nice living room with fancy furniture, a designer rug, and totally original artwork (OK fine, reproductions). It's an interesting transition. You finally leave your parent's home in early adulthood and start on a path toward being able to own nice stuff. Then, finally, just when you can afford the really nice stuff, these little creatures come along that can destroy it with tactical accuracy and speed. It's totally unfair.

We recently bought a new home, and since it had a playroom, the goal was to contain the bright plastic onslaught to that room and the kids' bedrooms.

Strategically, it was thought that having a giant room filled with toys would be a natural draw. Who would want to play in a room with grey furniture and hardwood floors when a wonderland of dense foam and primary colours were mere steps away?

Tragically, one of the things I have learned is that planning strategically around the whims of children is like trying to anticipate the movements of a squirrel. Not happening. The result is that I now have a toy bin in nearly every room in the house, except the kitchen, where the cupboard filled with Tupperware serves as a big draw.

I call this phenomenon, "toy creep"—what starts off as a stray doll and a few books, quickly evolves into a full-blown toy box. Of course, managing the location of the toys would be less of an issue if there were actually fewer of them to spread. We've tried limiting the number of toys we buy for our kids, opting for quality over quantity, but at a certain point you feel like a Scrooge giving your kids clothes and books for birthdays and holidays. My daughters love clothes, my eldest has a future in fashion, but even she wants something with moving parts, flashing lights, or interchangeable accessories.

There's a fine line between trying to teach minimalism and discourage commercialism, and being a party pooper.

In the end, the solution my wife and I have come up with involves tasteful toy bins and a focus on the kind of toys that have great replay value, rather than shiny things that get forgotten the next day. One thing I've learned is that having kids makes life messy and, surprisingly, I have embraced this idea better than I might have originally thought. My living room doesn't look MoMA-ready, but it does look well loved, and that's even better.

A Call To Arms: The Enemy Walks Among Us

Spencer Callaghan: Fight for your Right to Potty How Spock Reflected the Best of Humanity