A Few Minutes With The World's Fastest Woman 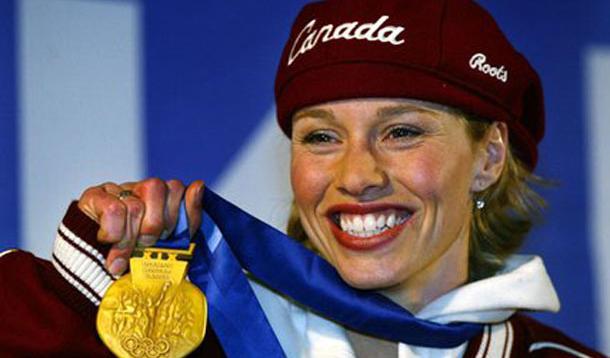 If you don’t already know, when I’m not writing here at YMC, I write on my personal blog Speed Skating Mom where I document my attempt to learn how to short track speed skate. When Erica offered me a chance to talk to Catriona Le May Doan, I was all over it.  Who is Catriona? She is a speed skater whose world record-setting wins captivated millions of Canadians. She is the first and only Canadian individual to defend a gold medal at any Olympic Games.  She held the World Record in the 500m for 10 years and still currently holds the Olympic Record. During her career Catriona broke 13 World Records.

The woman is fast.

She is also a busy mom of two who believes in giving back and when she isn’t motivating people to reach their full potential through speaking engagements she’s involved in charities, including walking the runway for the Heart Truth Fashion Show on March 8th.

No Need For Nerves

I wasn’t nervous about interviewing Catriona until my husband called ten minutes prior to tell me how nervous he was for me.  I hung up the phone and was worried I wasn’t worried and the nerves set in.

There was no need, Catriona is gracious, charming, easy to talk with and very passionate about spreading the message of health. I liked her instantly.  Catriona is 41 and as she said “at an age where medical issues are coming up for friends and family” which was why she was excited when she was asked to model in the Hearth Truth Fashion Show. “Women need to stop putting themselves last.”

But participating in the fashion show as well as travelling to speaking engagements means time away from her family. How does she balance it all? Catriona remembers being at a conference a few years after her daughter was born and someone approached her and remarked “Don’t you think you’re being selfish? You’ve done your thing, you should be home with your family.”

Did you just gasp? Because I did.  If you take one thing away from this interview, let it be what Catriona said next.

“We are different beings with different things that give us energy. We all know mothers will do anything for their kids, that is a given. When I travel to speak or do charity work, I’m a better mom because I’m doing what I love and I come back feeling refreshed and energized.”

While her kids don’t fully grasp the magnitude of their mom’s accomplishments they do think it’s cool she still skates and that her picture is on the wall at the oval.

Yes, this active mom still finds time to skate. She also bikes, runs, lifts weights, walks her dog and plays ringette—"It was strange at first because I hadn’t skated right in 30 years.”

You would think someone who broke and, to this day, holds world records she would be the epitome of confidence but what you see on the outside is not always what is on the inside. For years she struggled with nerves and a lack of self-confidence even when she was winning.  She would channel her fear and nerves by using a technique she developed herself.  For each race she would have four or five keywords and for the first 70 metres of a race, concentrate on one word, pushing away all other thoughts in her mind.

It helped to have the support of her parents. “They never pushed me. The held their arms out wide and told me they would give their guidance but they would let me find my own way.”  So even when she was frustrated from being on the road, had a horrible training session or any of the other numerous obstacles thrown in her way, she always wanted to skate. “If I had quit I never would have forgiven myself.”

Her drive and athleticism captivated the hearts of fans around the world, her passion for living an active life and helping moms understand it’s important to take care of themselves captured mine.

The Heart Truth Fashion Show is lucky to have her.

Wanna see Catriona and some other celebrities in person? I have a pair of tickets for The Heart Truth Fashion Show to give away to one lucky member. Leave a comment below telling me what lesson you took away from this interview and you're entered to win. The Heart Truth Fashion Show takes place on March 8th in Toronto. The prize is for the tickets only—transportation is not provided.  See full rules below.

Yummy Rules and Regs: You must be a Yummy Mummy Club member to win. Click to sign up! It's free and filled with perks. One comment per member. Entries accepted until March 5, 2012. Contest open to Canadian residents. Winners will be picked using www.random.org.