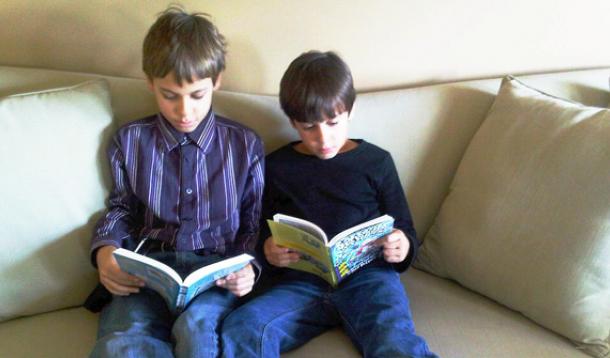 Son No. 2 is very much into reading because Son No. 1 is so into reading and sometimes the gods of awesomeness decide to smile upon me and have the younger copy the older’s good habits instead of the bad.  But for a long time, Son No. 1 didn’t like to read.  We read stories with him, bought him books, got him his own library card all to no avail.  He didn’t like to read.  As an enthusiastic reader and a writer it was a little frustrating for me.

Finally we just said screw it and stopped trying to force him to read.

Then along came Diary of A Wimpy Kid.  He started to read the first book it at school and when he told me how much he liked it, I bought him the entire series.  He read all four books in six days and has since read each of them again and again and again.  Not too long after that the Diary Of A Wimpy Kid movie came out.  We went one afternoon and he spent the entire movie on the edge of his seat narrating what was going to happen next.  As we left the theatre I asked "Did you like the movie or the books more?"  He thought for a moment and answered "The books. They have way more description."

It was one of those “aha” moments you always hope your kids will have.  That they will connect how the stories on the written page and played out within their head is one of the greatest forms of entertainment within our world.

If you are a parent of a reluctant reader these are some of the books in our house that have been a hit and will hopefully help spark the reading light within for your boys.

The Captain Underpants series by Dave Pilkey
Ages 7 and up

This series is filled with potty humour, silly jokes, imaginative story lines and funny pictures on every page.  Son No. 2 is completely captivated and I often find myself laughing out loud while reading with him.  These books are a great way to introduce your boy to chapter books.

Diary Of A Wimpy Kid series by Jeff Kinney:
Ages 8 to 13

These are the books that lit the light of reading for Son No. 1.  The main character is a middle school student named Greg Heffley.  The book is Greg’s diary (his mother forced him to keep one because we moms like to torture our children) and he loosely recounts each day's events, interspersed with his comic illustrations. A seriously great series.

Big Nate series by Lincoln Peirce
Ages 8 and up

Similar to Diary of a Wimpy Kid, the Big Nate series are chapter books combined with cartoons that will keep your kid captivated.

Who lives in a pineapple under the sea?  Or under your child’s pillow because they stayed up late reading?  I get that Sponge Bob is the most annoying cartoon ever and watching his show is blamed for poor attention spans but kids LOVE HIM.  We bought the whole series from Scholastic and both boys still read and re-read the adventures SpongeBob and his nautical neighbours.  Warning:  I did have to make Crabby Patties for dinner during the SpongeBob heyday when we first purchased the books.  This was a turkey burger that they both normally hated renamed Crabby Patty. Why yes, I am a genius.

Hatchet by Gary Paulson
Ages 11 to 13

When Son No. 1 was assessed and it came to light his reading skills were above his age, we struggled with finding a book that challenged his reading level yet contained appropriate content.  Hatchet delivers on both counts.  It’s the story of a 13 year old boy who is on his way to visit his dad when the single-engine plane he’s flying in crashes.  It’s a compelling story and Son No. 1 likes the book so much he’s read it three times.

While my kids haven’t read these next two books they came highly recommended:

Everyone Poops by Taro Gomi
Ages 18 months to 4 years

@jackiyo suggested this one.  As a mom of boys I know firsthand the fascination of poop and this book is the definitive scoop on poop.  What better way to introduce the world of reading than with a book filled with a topic they’re normally forbidden to talk about.  Let the giggling begin.

Catherine Jackson recommended this series.  Here’s what she has to say:

Hiccup Horrendous Haddock III may be one of the very best heroes in recent years.

Son of the chief Viking of the Hairy Hooligans, Hiccup is a cerebral non-conformist who must nevertheless fulfill his Viking destiny and train up a dragon. Mayhem and fart jokes ensue. The books are graphic, filled with exclamations, exaggerated text and ink splotches. The profusion of pictures which include nostril hair, loutish Vikings and angry dragons appeals to boys who may be reluctant readers but the storytelling keeps them reading.

This is by no means a definitive list so please add your best boy books below!  And as an added note, if your boys are reluctant to read follow their lead.  We have about a kajillion Club Penguin books in our house and while it wouldn't be my first choice in reading material for my littlest one, the fact is he reads them.  If they have an interest, try to find a book that reflects that interest.  You'll have them reading in no time.