A Little Bit Of History

Delawana Resort sits on the shores of Honey Harbour only a short two hour drive away from the GTA.

Originally when our family first went to Delawana 8 years and 9 trips ago, it was an all-inclusive resort that included kids’ camps and meal plans. But in 2013 Delawana went into receivership. It was then purchased by new owners and reopened in 2014 as a ‘self-catered’ resort that offers a very affordable alternative to cottaging up in Muskoka.

For the past two years we've stayed at Delawana for two weeks, which you'd think would make a teen and tween go a little batty but my kids love it up there so much that when offered a choice between a Disney cruise and Delawana, they chose Delawana without a moment's hesitation - for real. There's something to be said for enjoying the simple things in life and getting back to nature.

Recently Delawana started offering seasonal rentals from May to October and it's something we're seriously considering for next year.

(Note: We have paid for every one of our Delawana vacations. I was given nothing for this review - we really just love it there).

The resort has a variety of different accommodations that include rooms, suites, small cottage rentals, and large family cottage rentals. The family cottages come with a full kitchen and propane barbecues while the smaller cottages, rooms, and suites includes a charcoal BBQ, air conditioning, mini refrigerator, complimentary bottled water, and yes, wifi.

With the exception of the large family cottages, we have stayed in every room on the resort. All the rooms are rustic so you won’t feel bad if your kids bring in a little sand from the beach. Also, expect to see lots of friendly chipmunks. With a bag of unsalted sunflower seeds and a little bit of patience you may even become friends. 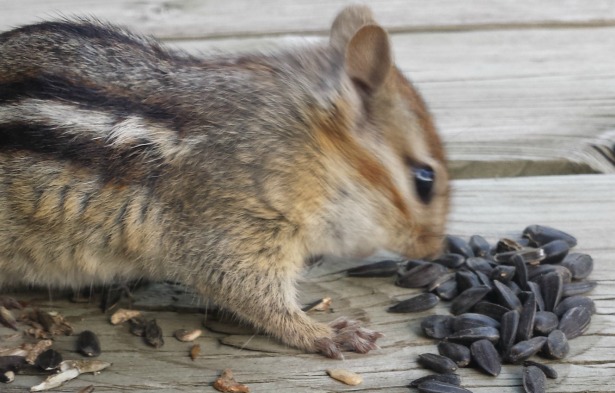 There are two sandy beaches, both with shallow entry, perfect for little kids. The North Beach also has large inflatables in the water that are great for kids of all ages (and kids at heart). 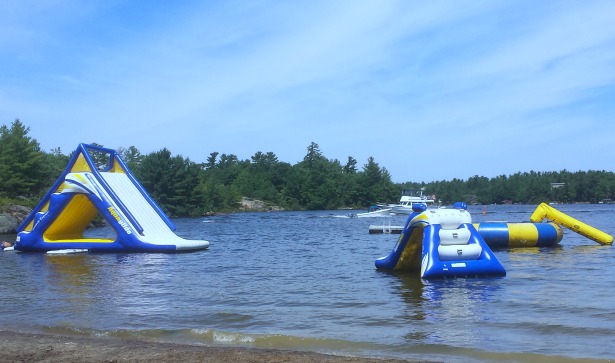 The West Beach is where you can sign out canoes, kayaks, and paddleboats from the guest services to explore the area or if you have little ones, stay in the dock area and paddle to your heart’s content.

Not up for the beach? Delawana Resort has a large outdoor pool and a sauna. The pool isn’t heated but in the heat of summer the average water temperature fluxuated between 76 and 78 degrees – refreshingly nice on a hot Muskoka day. 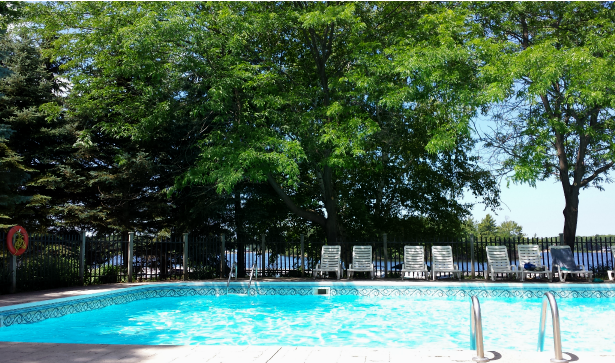 There’s no shortage of outdoor activities at Delawana.

Visit the centrally located reception building where you can sign out board games, movies, books, and a variety outdoor games including bocci and croquet. Or simply get a basketball to shoot some hoops, try your hand at tennis, rent a bike to explore the resort, or grab sand toys to build a castle at the beach.

The resort also has a children’s area that includes plastic and wooden play structures, swingsets, a large outdoor chess board (really large!) horseshoes, and shuffleboard.

While each room comes with a charcoal barbecue, the reception building also contains three community kitchens where you can cook food, wash dishes, and eat meals. Breakfast, lunch, and dinner is available at the Narrows Grill situated on the resort.

Just off-site within walking distance of the resort in the town of Honey Harbour there is a small grocery store, LCBO, and the Thrive Foods Café and Marketplace, a locally owned market that has baked goods, prepared foods, boxed lunches, and more.

Join the #BabyHealthApp Twitter Chat for a Chance to Win!
Tweets by @YummyMummyClub