Would You Buy This? 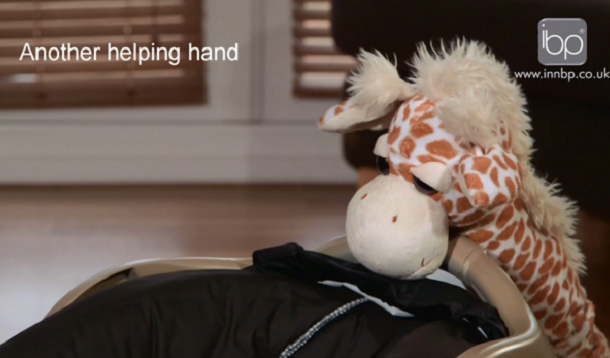 I’ll save you the trouble of reading all of the comments and summarize that there are a lot of women who will think you are a terrible, no good, very lazy mom and you will never bond with your baby if you buy this.

My second son was a bit of a screamer. He quite literally screamed himself to sleep for about a year.

There were lots of things I would do to try and calm this sweet screamy baby…two or three times a day we would walk around our neighbourhood with him strapped into a Baby Bjorn as he screamed his teeny tiny little head off until he finally conked out. I became such a familiar sight pacing back and forth that one neighbour would knock on her window to get my attention and wave me into her home so she could carry him for awhile just to give me a break. He also loved it when I bounced on an exercise ball while holding him. For hours. Basically any sort of movement made him happy.

These things were great but not always convenient because I also had a toddler and toddlers don’t find it very entertaining to walk around the neighbourhood with a screaming baby for hours at a time. Go figure.

I can’t remember what my final breaking point was but whatever happened that day, the end result was an email to my husband that simply said:

“Don’t come home without this,” with a link to a baby swing.

Four hours later the swing was set up in my kitchen. It was the swing that saved my sanity. The swing that allowed me to spend time with my toddler instead of putting him in front of the t.v. while I bounced on an exercise ball. The swing that STOPPED MY BABY FROM SCREAMING.

I think it cost about one hundred dollars but let me be very clear…. I WOULD HAVE PAID $10,000 FOR THAT SWING.

So it pisses me off when I read judgmental comments on a video of a rocking giraffe that at their very essence are written to make another mother feel “less than.”

The fact is every single one of us has crutches we will use to make motherhood easier at one point or another.  EVERY. SINGLE. ONE. OF. US. You may say you won’t or think you won’t but I’m here to tell you that, yes… yes you will.

Maybe your crutch will be to order groceries online and have them delivered so you don’t have to grocery shop with a newborn and a toddler (by the way, they also deliver wine – just saying), or you got a super awesome carrier to free up your arms and hands to do other things. Maybe you bought a kick-ass double action breast pump so your partner could also get up in the middle of the night to feed your baby, or maybe you'll have a house cleaner come in once a week.

Your crutch is going to be unique to you but at some point during our motherhood careers we are all going to get or use something that will make our lives a teensy bit easier. If it’s not when you have a newborn baby, it will be when you have a toddler, or a school-aged kid, or a teenager. Because motherhood is a marathon and marathons are f*cking exhausting. Only unlike a marathon, there is no finish line for motherhood, it just keeps going and going and going.

So this is for every mom who has ever done something to make her life a little bit easier to help get through a bad day.

This is for every mom who has ever felt judged about a decision she made that worked for her and her family.

This is for every mom who looks at that video and thinks to herself, “I’d really like that” and then cringes as she reads the judgmental comments.

Because that swing saved my sanity and buying it didn’t make me a terrible, no good, lazy mom who didn’t bond with her kids. In fact, those kids are now much older and they're pretty spectacular.

Go buy it, I’ve got your back.

Category:
Family - Babies
Tags:
rocking giraffe
motherhood and being judged
why are moms so judgmental