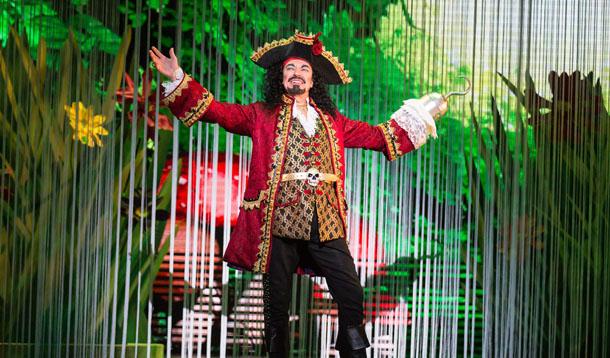 One of my favourite childhood memories is watching the "Carol Burnett Show" with my family. It was the ultimate variety show/sketch comedy and I looked forward to it every week. Now, as an adult, I realize many of the jokes went over my head but the best part for me was the anticipation – waiting to see if this would be the week where Carol, Tim, Harvey, or Vicki couldn’t contain the laughter.

It was live TV and as hard as they tried not to laugh, there were many times when someone finally broke. But what was even better than the laughter was how you could see that this group of people loved what they do. To this day, if I’m feeling down and need a quick pick-me-up, I’ll watch Tim Conway do his Siamese elephants joined at the trunk skit.

That “you never know what’s going to happen but you get to watch people who love what they do” feeling is why I love the yearly tradition of seeing a Ross Petty Production.

In our home, we try to give our boys experiences instead of gifts. When I offered them the choice of getting a Christmas gift or doing something together as a family, they both chose family.

Our first experience was two years ago when we went to see The Little Mermaid and they couldn’t stop talking about it. I knew a lot of the jokes went over their heads but that’s what makes a Ross Petty Production so spectacular – there are topical jokes for the parents, and lots of loud booing and screaming allowed by the kids. It’s quite literally the only theatre show that encourages you to be loud during the performance.

This year’s production of Peter Pan is no different. Five minutes into the show there were Justin jokes (both Bieber and Trudeau) for the parents, and a funny musical number for the kids.

Why should you take your kids to see this year’s production of Peter Pan?

It’s Your Last Year To See Ross Petty On Stage

This is Ross Petty’s last year for playing a bad guy on stage. I was actually considering starting an “It’s a Pity Petty Petition” to STOP THIS MADNESS because he makes you love the bad guy. But I get it...it’s been 20 years of producing and acting in his productions so he probably deserves a break NO MATTER HOW MUCH IT HURTS ME.

Don’t just see the show, turn it into a full experience. I take my boys on the Go Train (which runs a close second as their favourite thing to do next to seeing the show), enjoy a dinner out, and then end the evening with show. Afterwards, we take a walk downtown to see the holiday lights. My best advice is to take lots of photos, print them out, and create a photo album. You’ll understand why when you see your kids flipping through the photo album next July reminiscing about their favourite parts of the evening.

Cultivate a Love For Theatre and The Arts

In a day and age where kids are in front of a screen for hours at a time and ‘entertainment’ (I use that word loosely) is only a YouTube video away, our kids are missing out on this wonderful aspect of entertainment. By creating a love of theatre at a young age, you’re helping to form the audience of the future. Let’s not see live theatre go the way of the dodo bird and letter writing.

Long after the show is done, your kids will still be talking about it

Without spoiling it for you, there is one part in the show where Dan Chameroy goes into a slow motion fall that will have you laughing so hard your stomach will hurt. His comedic timing is pure brilliance and to see him live in person is an experience no one will forget.

And last but not least...

The show itself is spectacular but what you want to watch for is the “break” because as hard as he tries not to, Ross Petty can’t help but burst into laughter at different times throughout the show and when it happens, you can’t help but laugh with him.

It’s that “you never know what’s going to happen” feeling and it’s worth every penny.