How Can Kids Be Bored If You Keep Giving Them Sh*t To Do?

The Three Stages Of Boredom 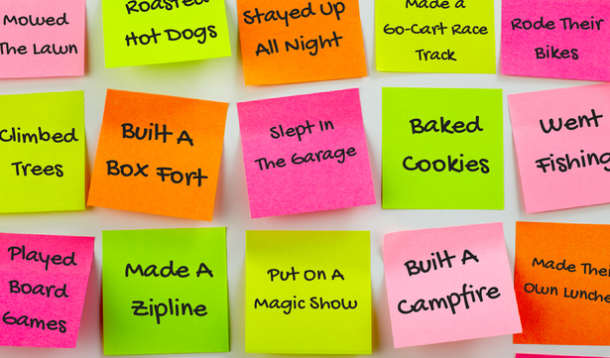 When my kids come to me and tell me they’re bored, my response is nothing. Like, literally. I just stare at them. Usually with one eyebrow raised to convey my disbelief.

I used to try to come up with ideas.

“Make a fort. Go for a bike ride. Go to the park!” shouted out with unbridled enthusiasm.

My suggestions were inevitably met with, “Meh. Don’t really feel like it. Nyah.”

This daily conversation was a Defcon Irritation Level 1 in my life, so I simply stopped giving them ideas, because really? Being bored is a problem of the privileged and you know who isn’t bored? The little boy who has to walk ten miles every day for clean drinking water. Or the little girl who isn’t allowed to go to school and is at home taking care of five siblings.

This is also a speech I’m tired of giving.

What I discovered is that boredom is a good thing, it gives birth to creativity. But like birth, it’s a bloody, messy process. However, once you get through these three stages, the possibilities are endless.

When my youngest child first realized I wasn’t going to help come up with ideas to entertain him, the shit hit the fan. Apparently, it was my job to offer up suggestions he could shoot down. That I wasn’t doing it anymore made him kind of lose his mind. On the plus side, neither one of us was bored anymore, because we were too busy fighting.

This brings us to Stage 2, where my son would then beg me to give him an idea. “Please mom! I’m just so bored! I promise to not say no if you give me an idea for what to do.”

And you know what? I fell for it time and time again. I honestly believed that he would hear my next suggestion and be all, "That's the best idea ever, mom! I love you!" So I would give him just one more idea only to have it shot down like a skeet disc.

I should have learned my lesson from the hamster promises.

We alternated between Stage 1 and Stage 2 for a very long time until I finally threw up my hands, said screw it, and began to use my stare-down method. After a short interim, Stage 3 began.

Once they accepted I wasn’t going to give them ideas, guess what? They came up with stuff to do ON THEIR OWN and it was all kinds of awesome. Better than any idea I ever could have come up with.

This summer because my kids were bored they:

Now, I want you to repeat after me: My name is not Julie McCoy. I am not responsible for entertaining my kids for every hour of every day.

Let them be bored. I know you're scared. I know you think it's impossible, that they will pester you until you finally cave. But you have it in you to get through the first two stages. I believe in you.

And once you get through those stages, you'll be able to sit back and enjoy the magic of Stage 3.

Not only do I let my kids be bored, I let them CLIMB UP SLIDES. It's the wild west over at my house.

Category:
Family - Family Fun
Tags:
why you need to let your kids be bored
the three stages of creativity
activities for kids when they're bored
Sharon DeVellis
boredom
boredom busters