Have You Ever Unintentionally Made Your Child Afraid?

It Still Hurts My Heart That I Made Him Fearful 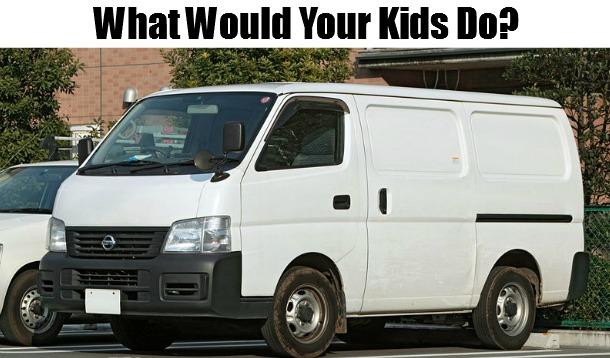 Last summer, two men in our community drove around in a white van trying to entice kids to get in. Police issued warnings and it was covered in our local paper several times.

I felt it was necessary to talk with my boys about what was happening and what to do if they were ever approached like this. The incidents were close by, with one of the cases reported only a few blocks away from our home, and I didn’t want to bury my head in the sand. We not only talked about it, we role played and practiced. I learned about the importance of role playing from this video on Stranger Safety, and highly recommend it to anyone with kids (not sponsored!).

I felt like a failure. My intention had been to prepare my boys just-in-case, not to make them suspicious and afraid.

Fast forward to two weeks ago, and my youngest son is playing outside with his friend. They are in front of the friend’s house with a metal detector, and a blue van slowly approaches and stops a few feet away from them. A man rolls down the window and calls the boys over to ask if the metal detector actually works.

Both boys immediately went into the house and told the mom.

Could it have just been some guy super interested in metal detectors? Yep.
Am I glad my son didn’t take the chance? Yep.

A real-life situation played out within a block of our home and thankfully my son did what he should have—what I taught him. But in the interim, it was also eight months of being fearful of every white van he saw.

So, I will leave you with this. It still kills me inside that he is afraid of white (and now blue) vans. I did that to him. Me.

Yet the other part is thankful we had the discussion, because when the situation presented itself he knew what to do.

And that is the dichotomy of parenting, is it not? There is that balance—sometimes we get it right, sometimes not.

In this case, I'm still not sure which one it was.

Has a real-life situation every played out like this for you and your kids?

For more safety tips, check out Three Ways To Keep Your Children Safe In A Crowded Place and Teaching Children How To Cross The Street Safely.

Category:
Family - Kids
Tags:
Sharon DeVellis
stranger safety
teaching your kids about stranger safety
what to do when a child is approached by a stranger
safety
street safety
stranger danger
street smarts